Avatar: The Way of Water hit theaters on Friday, 13 years after the blockbuster original wowed moviegoers with its incredible 3D visuals. Director James Cameron is back for more adventures in the lush world of Pandora, alongside original stars Sam Worthington and Zoe Saldaña as Na’vi heroes Jake Sully and Neytiri.

“The parental angst and the young characters’ compelling journeys lend emotional weight to The Way of Water,” said CNET’s Richard Trenholm in his review. “The sci-fi action is cathartic and exciting, the environmental message is compelling and the graphics are simply amazing.”

The movie’s release date for Disney Plus hasn’t been announced yet, but the first movie is available there if you want a trip to Pandora now.

Jake Sully and Neytiri’s family holds the key to the ending of the sequel, after the Colonial people of the Resources Development Administration (RDA) return to Pandora and wreak havoc on the lives of the world’s native people as they search for a replacement for the dying Earth. They also embark on a hunt for the treacherous human-turned-Na’vi Sully, leading us to the film’s final conflict.

Set 15 years after the original, there’s a lot to digest as this film throws loads of terminology and events at you in its three-hour, 17-minute runtime (and no, it doesn’t have a post-credit scene). Let’s dive into the gorgeous blue SPOILER waters of the Avatar sequel.

After Colonel Miles Quaritch (Stephen Lang) and a bunch of his Marine goons were killed by Neytiri in the first film, they were reanimated in Na’vi bodies with a backup of their human counterparts’ memories. The clone Quaritch was surprised to learn that Miles “Spider” Socorro (Jack Champion), a human who grew up with Sully and Neytiri’s children, was the son he abandoned in his old life.

Assigned to kill Sully for the RDA, Quatrich uses Spider to learn the ways of the Na’vi and hunt his prey, but despite his claims of indifference, he obviously grows fond of the teenager. I think the Na’vi are protesting too much. 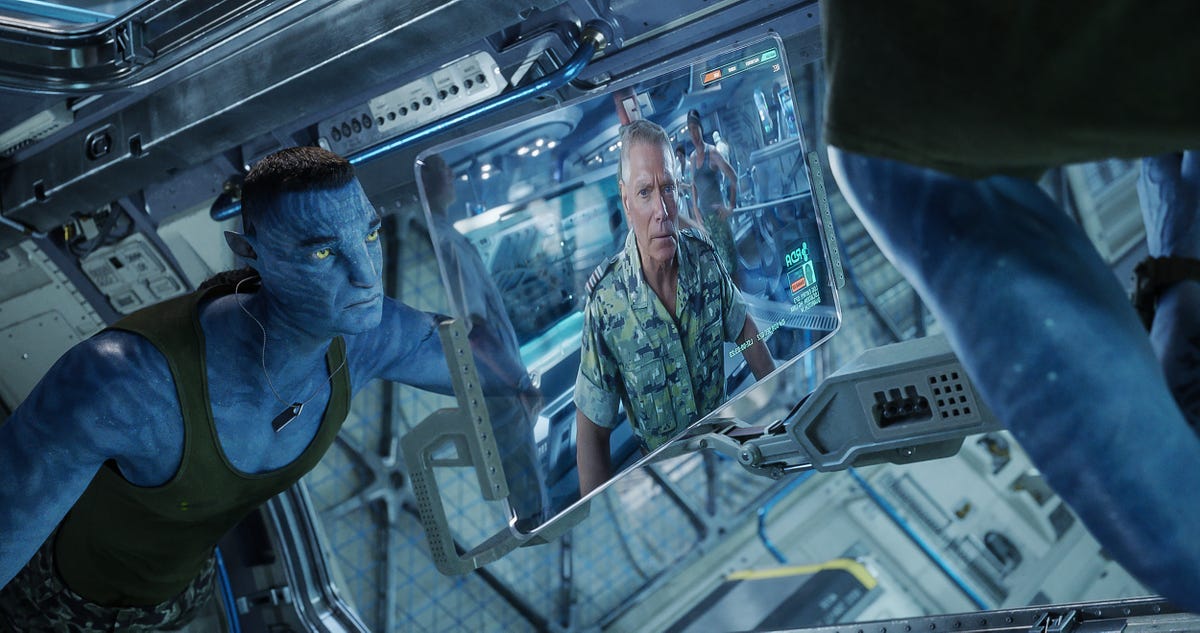 Na’vi Colonel Miles Quaritch has a more emotional history than his human self.

The late RDA scientist Grace Augustine (Sigourney Weaver) acted as a bridge between the humans and the Na’vi, and also directed the Avatar Project that allowed Sully to become one of the blue aliens. We discover that her avatar was pregnant when she died and gave birth to Kiri (also Sigourney Weaver, who is amazingly persuasive as a teenager). Adopted by Sully and Neytiri, she is a teenager at the time of the sequel and has a special connection to the Na’vi deity Eywa. 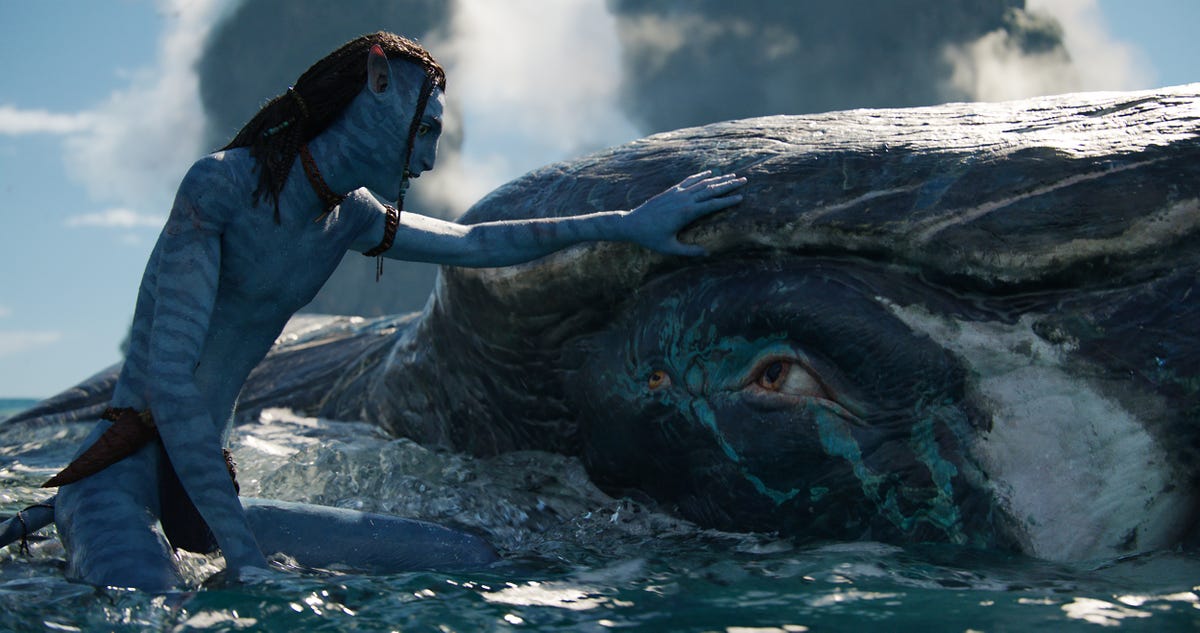 Lo’ak’s bond with Payakan occupies part of the film’s runtime, but ultimately helps the Na’vi win the day.

death in the family

Neteyam – who certainly appears to be Sully’s favorite child – is fatally shot in the first confrontation of the final battle, which takes place on a Navy fighter ship commanded by Quatrich. His family mourns briefly, but then leaves to face their adversary one last time.

Kiri and Tuk manage to recapture themselves, with Quatrich holding a knife to Kiri’s throat as Sully confronts him. The sneaky Neytiri gives the villain a taste of his own medicine by threatening Spider. Quatrich briefly pretends not to care about his son, but eventually relents and lets Kiri go. 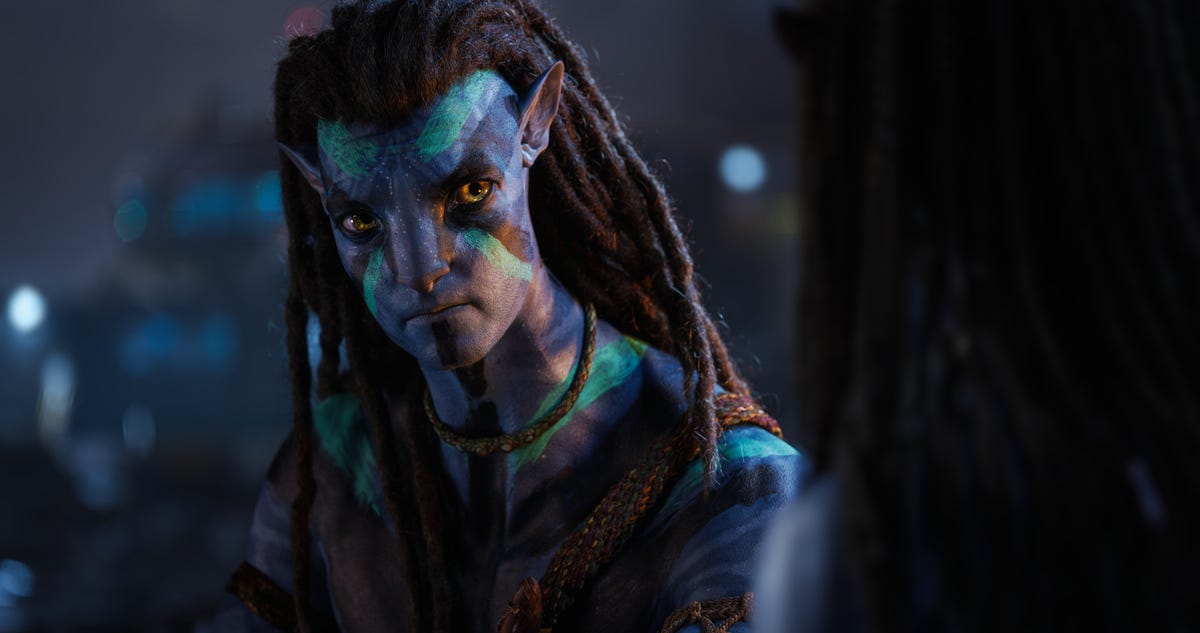 Turns out Sully was longing for a rematch with his nemesis.

This leads to Sully and Quatrich having an intense one-on-one confrontation as the ship sinks (it even rears up like the Titanic). Kiri and Spider manage to escape into the water while Neytiri and Tuk attempt to escape through the bowels of the ship before finding themselves trapped.

It’s close, but Sully manages to defeat Quatrich in their nasty underwater fight, leaving him for dead. Sully escapes with the help of Lo’ak and the breathing technique he learned from Metkayina, and Tulkun sidekick Payakan joins for the final stretch.

Kiri uses her connection to Eywa to create a path made of bioluminescent fish for Neytiri and Took, allowing them to swim to safety. 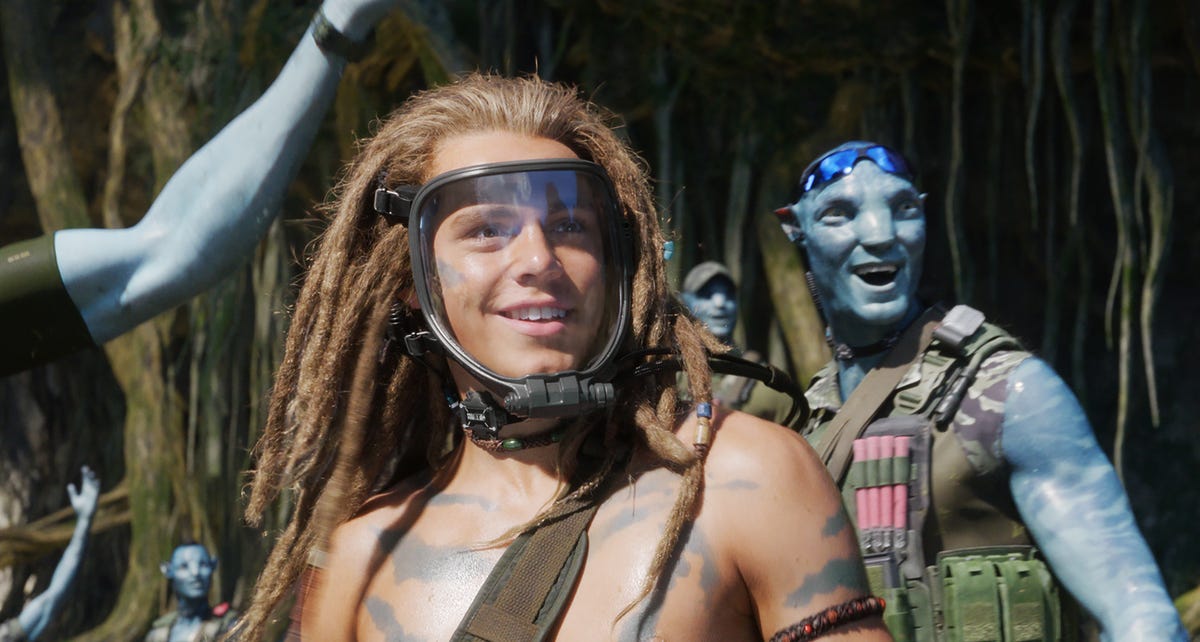 Spider saves his father’s life but doesn’t stay with him.

Spider makes the morally right but logically questionable decision to save the unconscious Quatrich before he drowns. The villain flies off with his Ikran because he has to return in a sequel while Spider returns to his Na’vi family. Character development for everyone.

After the battle, Sully and Neytiri bury their prodigal son Neteyam in the ocean. His body is embraced by the algae, suggesting he is returning to Eywa. Due to their loss, the family is also accepted as their own by the sea-dwelling Metkayina clan. 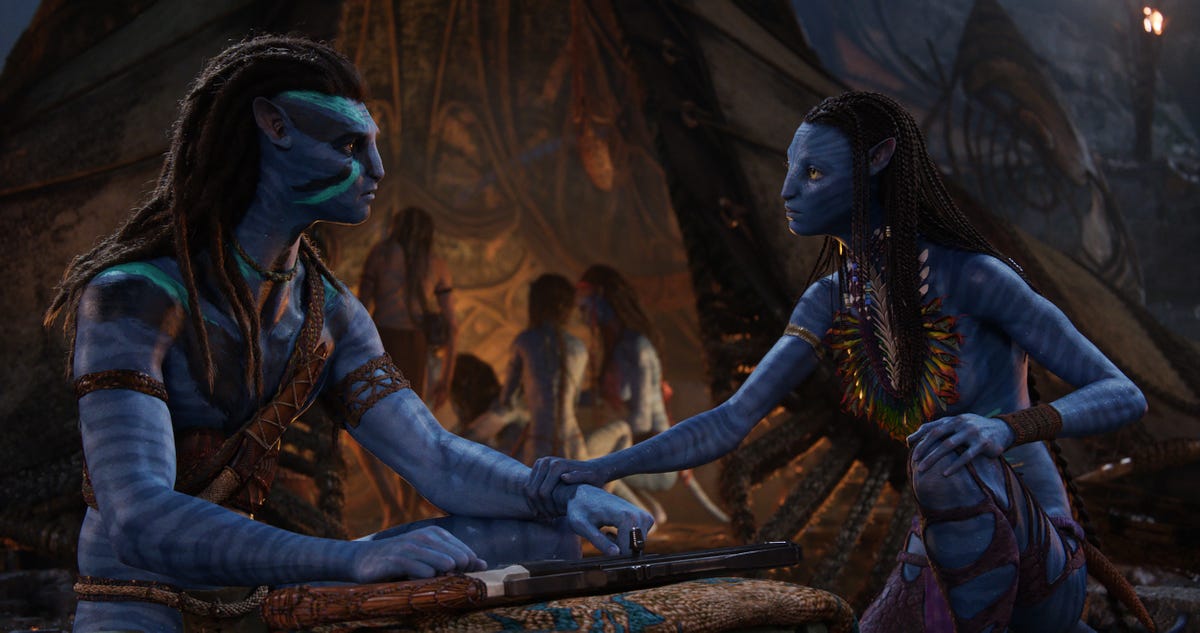 Our heroes suffer a heartbreaking loss.

Sully and Neytiri go to the ancestral cave and connect to the Metkayina spiritual tree, allowing them to communicate with Eywa. It allows them to see Neteyam, who vacillates between his teenage self and a child while speaking to Sully. It suggests that the being they encountered was a mixture of Neteyam’s spiritual energy and his parents’ memories of him.

Sully accepts that they cannot keep running from the human invaders – they must fight. I’m guessing that will happen in Avatars 3, 4, and 5 (coming out in 2024, 2026, and 2028). In the final shot, Sully opens his eyes, reflecting the ending of the first film.

You don’t have to watch Avatar: The Way of Water’s lengthy credits sequence to get a hint of the third film, there’s no mid or post-credits scene. However, there are nice renditions of some of the images from the film in the first credits sequence, so it’s worth sticking with.

You may also want to go to the bathroom or get some fresh air after sitting for more than three hours. 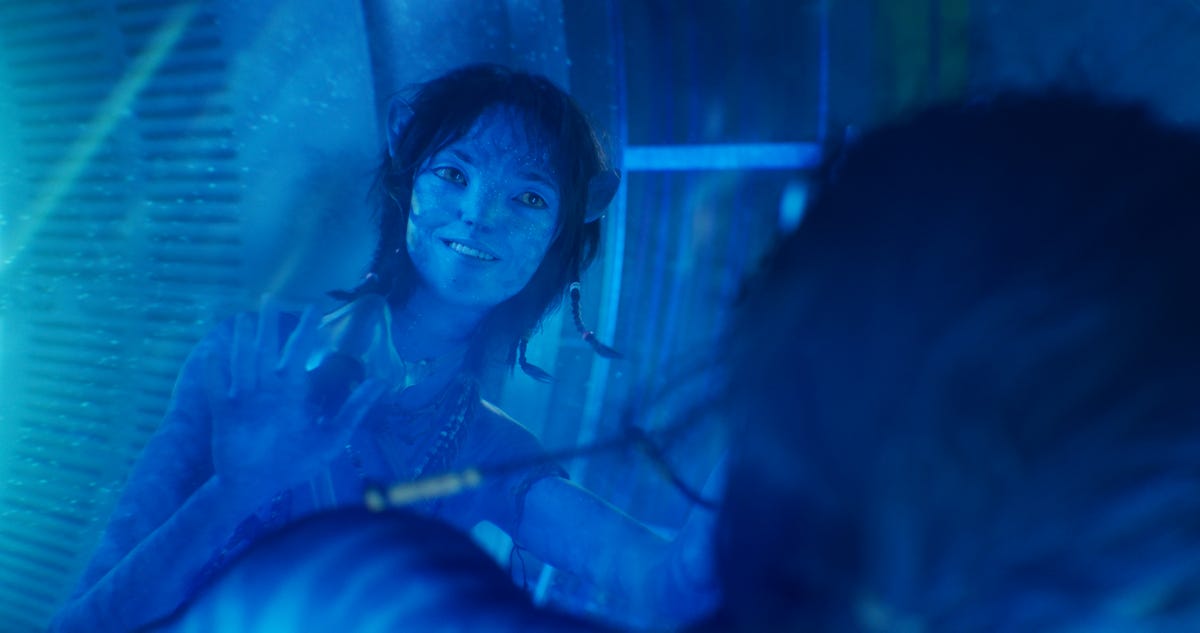 Kiri’s mysterious connection to her late mother seems to have given her special abilities.

What’s up with Kiri? She has a fit connecting to Grace through the tree – probably because she and her late mother share the same soul or something similar – but seems to have a deeper connection to Pandora’s flora and fauna than other Na’vi.Did Spider Sully and Neytiri know he saved their murderous nemesis? It is likely that Quaritch will develop greatly in future sequels as he has bonded with his son and embraced some of the Na’vi ways. Why was the introduction of the miracle substance that can reverse human aging so casual? It’s far more intriguing than unobtanium, the precious mineral the RDA was looking for in the first film. What happened to Ian Garvin (Jemaine Clement), the marine biologist who seemed to have sympathy for the native people of Pandora after the whaling ship was destroyed? He appeared to be a potential ally for the Na’vi. Why do we see so little of the human invaders? General Frances Ardmore (Edie Falco) is quite intense, but is basically forgotten after giving Quaritch his mission. She also appears in the prequel comic Higher Ground, based on Cameron’s first draft for the sequel, revealing more of the events between the films. What does the earth look like in this universe now? We only get a glimpse of it in the first movie, but it must be pretty bad as the RDA is trying to make Pandora a new home for humanity.

2023 is coming to new movies from Marvel, Netflix, DC and more

What Brittney Griner’s return for the 2023 WNBA…