Fires, floods and storms scare the residents of Montecito

In the city of Montecito, where the average home costs $5 million, Bentley drivers leave their car windows open when they get out to get something from the market, and the residents just call Gwyneth Paltrow “Gwyneth”, it’s hard to imagine that ever anything will happen wrong here. And mostly nothing happens.

But massive storms, fires and the city’s location in the foothills of the Santa Ynez Mountains have left a precarious existence for the mostly affluent residents, who were again ordered to evacuate on Monday as record-breaking rains battered the coastal enclave.

This order came on the fifth anniversary of the violent debris flow on January 9, 2018 that killed 23 people. Traumatized by this experience half a decade ago, most of the city’s 9,000 residents followed government orders to disappear. Brown waves lapped the empty sands of the Pacific Ocean, and muddy waters pooled on the streets and sidewalks of the trendy shopping district on Coastal Village Road. 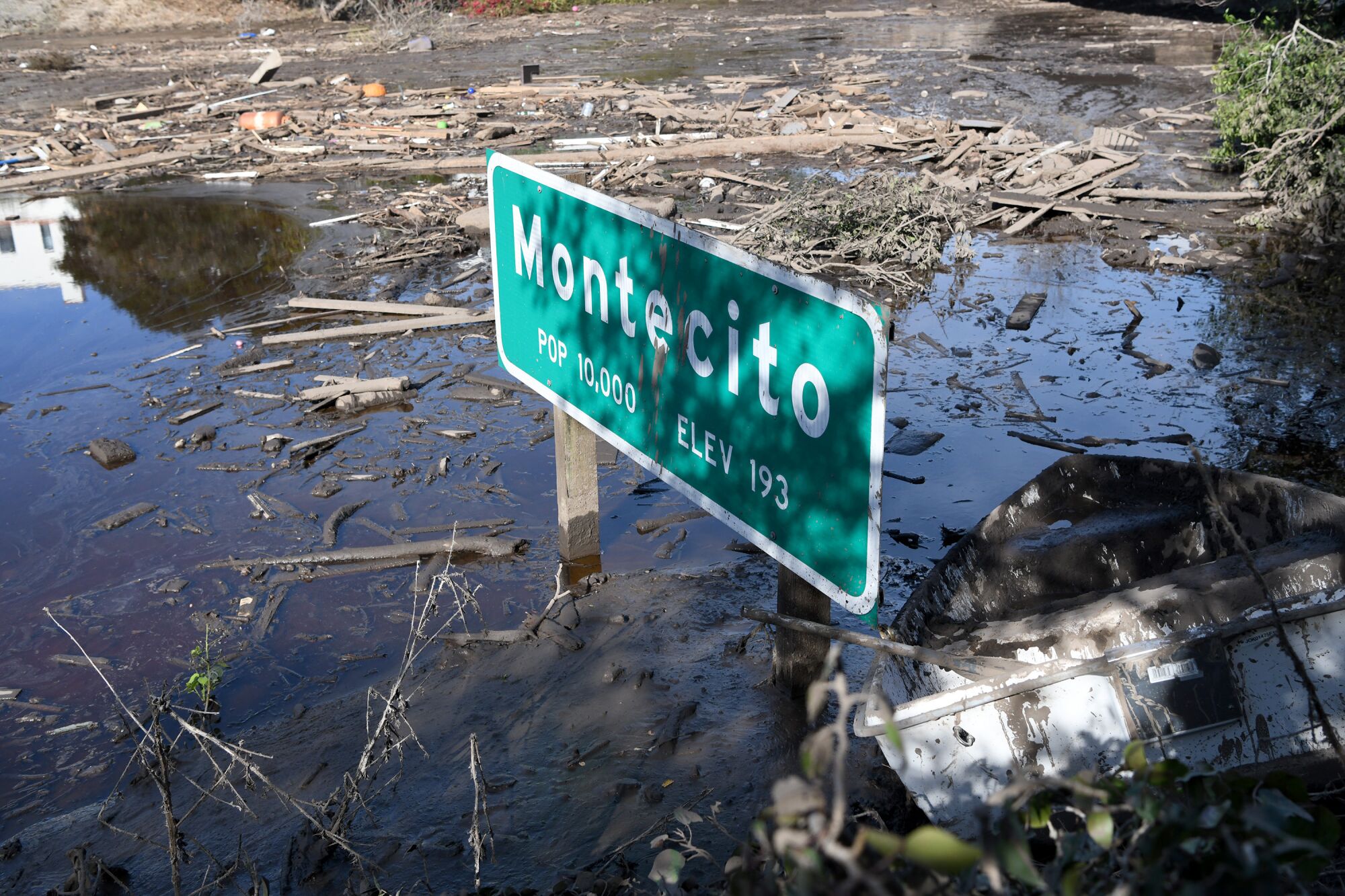 A Montecito freeway sign stands in water and mud along Highway 101 on January 14, 2018.

(Michael Owen Baker / For the Times)

No one was killed or injured in Montecito on Monday, although more than 500,000 cubic yards of material was dumped in the city’s debris basin during the 36 hours that the storm dumped more than 12 inches of rain, said Kevin Taylor, chief of the Montecito Fire Department.

Taylor’s agency rescued 50 people, compared to 900 during the 2018 storm — a difference he said underscored how much more effective the evacuation order and storm preparations were that year.

“This is the price of living in paradise. We’ve got rain and mudslides and wildfires,” said Richard Mineards, a gossip columnist for the weekly Montecito Journal who has lived in the city since 2007, which he compared to California’s Hamptons. “But what could be nicer than a sunny day with Pacific sparkles and an ocean breeze blowing? What could be nicer than living in Montecito?” 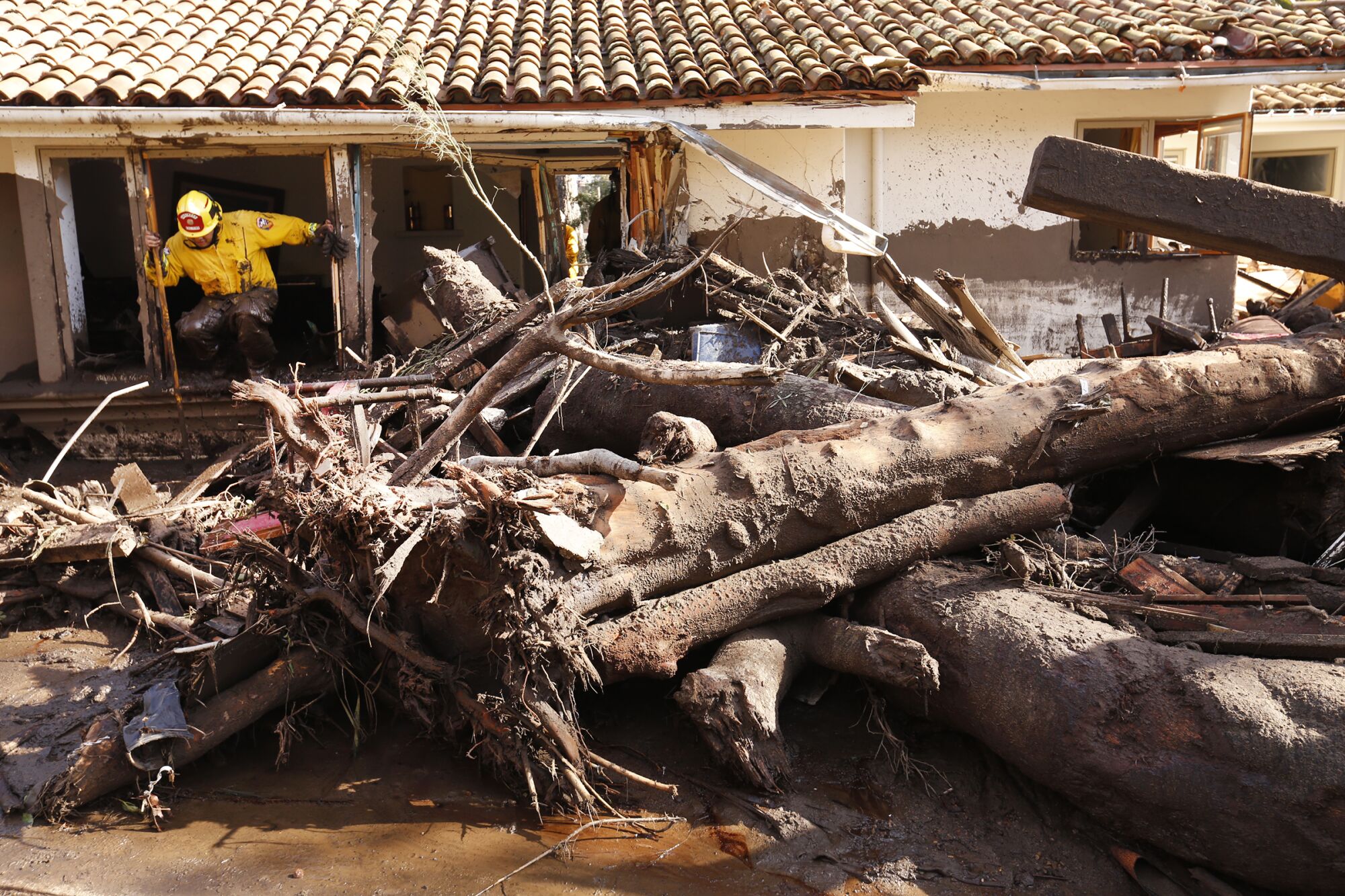 Nick Bautista of the California Department of Forestry and Fire Protection searches for residents in a mud and debris-filled house on Olive Mill Road in Montecito on Tuesday.

The beach town in Santa Barbara County has become synonymous with Hollywood types looking for a home away from the amateur photographers of Tinseltown. Celebrities like Oprah and musician Adam Levine own estates in Montecito, and royal defector Prince Harry, Duke of Sussex, and his wife Meghan, Duchess of Sussex filmed much of their Netflix documentary at their estate in the city.

“Celebrities feel safe here because people are so used to them that we just leave them alone,” said Pam Peterson, a Montecito resident whose grandfather invented the Egg McMuffin. “I saw Rob Lowe at the grocery store this morning. I see Ellen [DeGeneres] at Tre Lune all the time.”

But the celebrities are not spared from the biblical rains.

“Montecito is under forced evacuation. We are on a higher level, so they asked us to take shelter on the spot. Please everyone stay safe,” DeGeneres wrote in a caption to an Instagram post Monday. Her video showed a raging creek near her home in Montecito.

Other luminaries were more reticent about their evacuation.

A publicist for the Duchess of Sussex declined to say whether she and Prince Harry left Montecito during the storm.

“We would never share her whereabouts for security reasons,” the publicist said.

Santa Barbara County residents and public works officials have been making changes to the hillside community since 2018 to ensure future storms would be less destructive. The county completed construction of a $21 million debris basin this fall to help contain sediment, boulders and trees caught in streams during storms.

“I moved away about 10 minutes because my daughter was very certain because of her trauma that she doesn’t want to live in Montecito anytime soon.”

– Kim Cantin, whose husband and son were killed by a debris flow during the 2018 storm

The Project for Resilient Communities, a Montecito nonprofit, raised $5 million after the 2018 debris flow and used the funds to install nets high in the mountains that catch and slow debris as it slides toward the city. Photos of one of the nets showed that it was completely full after Monday’s storm. 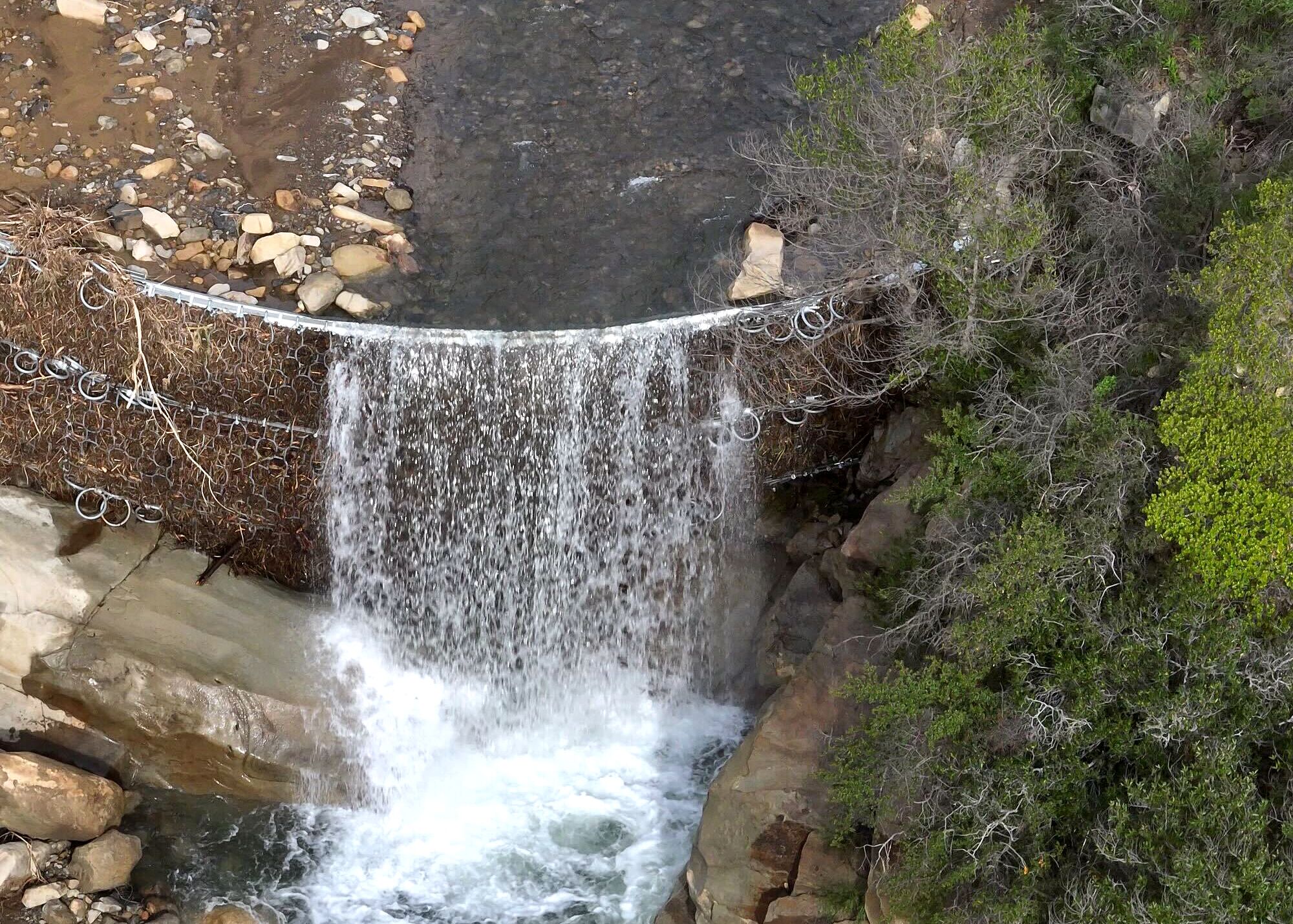 A net has caught debris in the Santa Ynez mountains.

(Harry Rabin / On The Wave Productions)

Regrowth of trees and shrubs since the Thomas Fire also made the 2023 storm’s runoff less wild, experts said.

The changes helped protect Montecito residents, who were ordered to evacuate but did not. Brian Fitzgerald, a Los Angeles transplant recipient, has not left — nor has he fled during the deadly debris flow in 2018.

“I’m not one of those people who needs to be evacuated,” he said as he rode around town on a pedal electric bike with a friend on Tuesday morning. “But around 3:30 a.m. I could hear the boulders banging together and being dragged down the road.”

Fitzgerald got up and tried to find a hotel, but everyone was booked, so he drove to a yacht club he’s a member of and slept in his car in the parking lot. Hours later, the sun had begun to peek through the remaining storm clouds, drying flooded roads that were slowly reopening to traffic.

Up the hill towards Montecito Hot Springs, 95-year-old Richard Schultz also stopped. At his huge Spanish colonial home overlooking the expanse of Montecito, Schultz said debris flowing down the mountain tends to bypass his home on either side, bringing him back to safety in 2018 and Monday.

“I’m stubborn. I know the drainage pattern,” the retired plastic surgeon said while sitting in his home office. 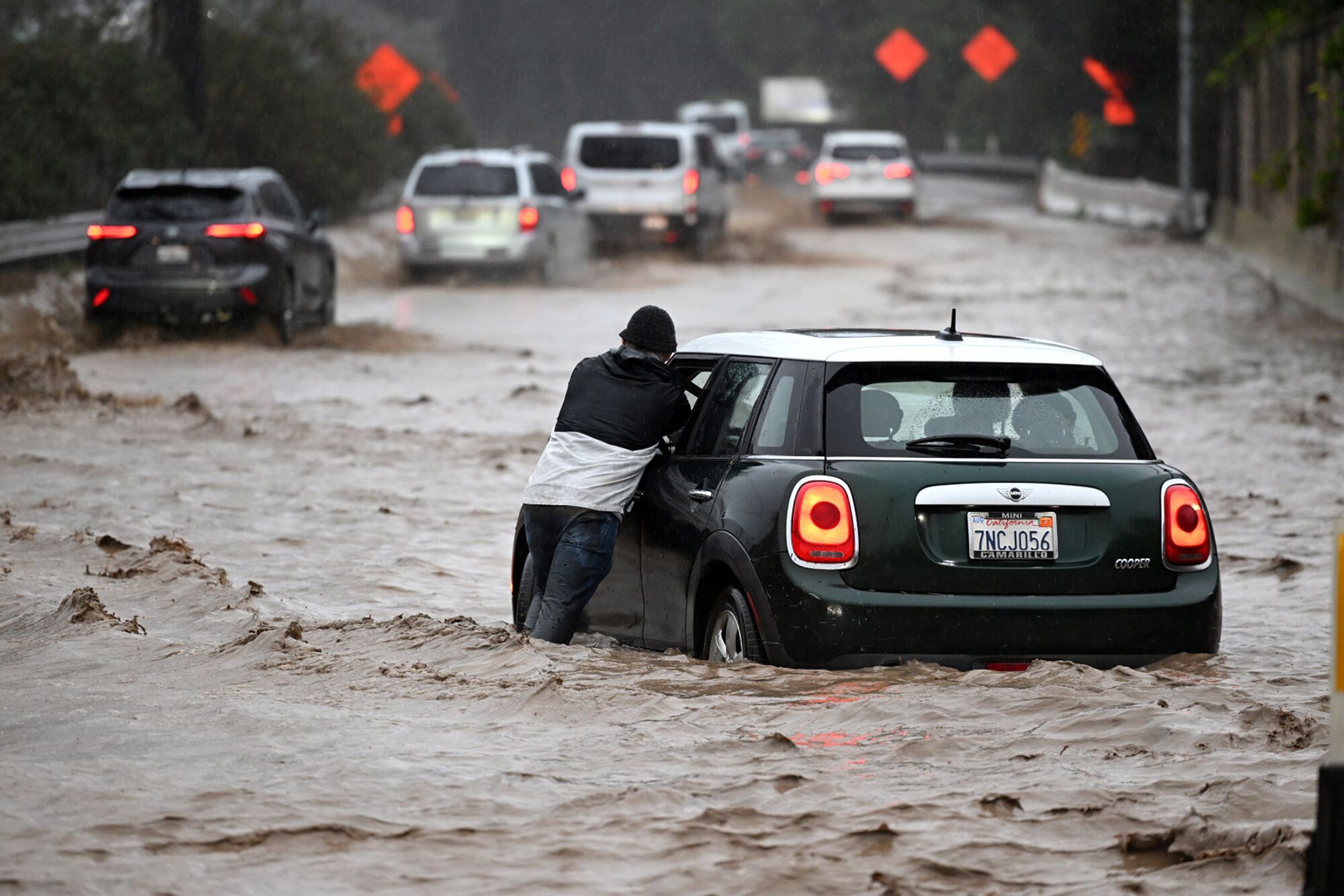 James Claffey pushes his stuck car off the 101 freeway southbound in Montecito Monday.

(Michael Owen Baker / For the Times)

Schultz evacuated during the 2017 Thomas fire when flames licked his property and burned his hedges and driveway lights. But when the rains came on Jan. 9, 2018 and brought with them the deadly debris flow, he stayed put and lived in his home for 10 days without internet or electricity, with sheriff’s deputies checking on him every few days and water brought.

“The most devastating part of this experience was the lack of stimulation,” he said.

Not everyone has the audacity to stay in Montecito like Schultz and Fitzgerald.

Kim Cantin knows the devastating effects that rain can have on property and life. After deciding to remain in an area not under a mandatory evacuation order in 2018, her husband and son were killed in the rubble. She was dragged about 600 feet and came to a stop in the middle of an intersection on a pile of debris wrapped with electrical wires. Her daughter was buried alive for six hours but survived. Her son’s remains have not been found for more than three years.

“I moved away about 10 minutes because my daughter was very certain because of her trauma that she doesn’t want to live in Montecito anytime soon,” said Cantin, who now lives in Santa Barbara. 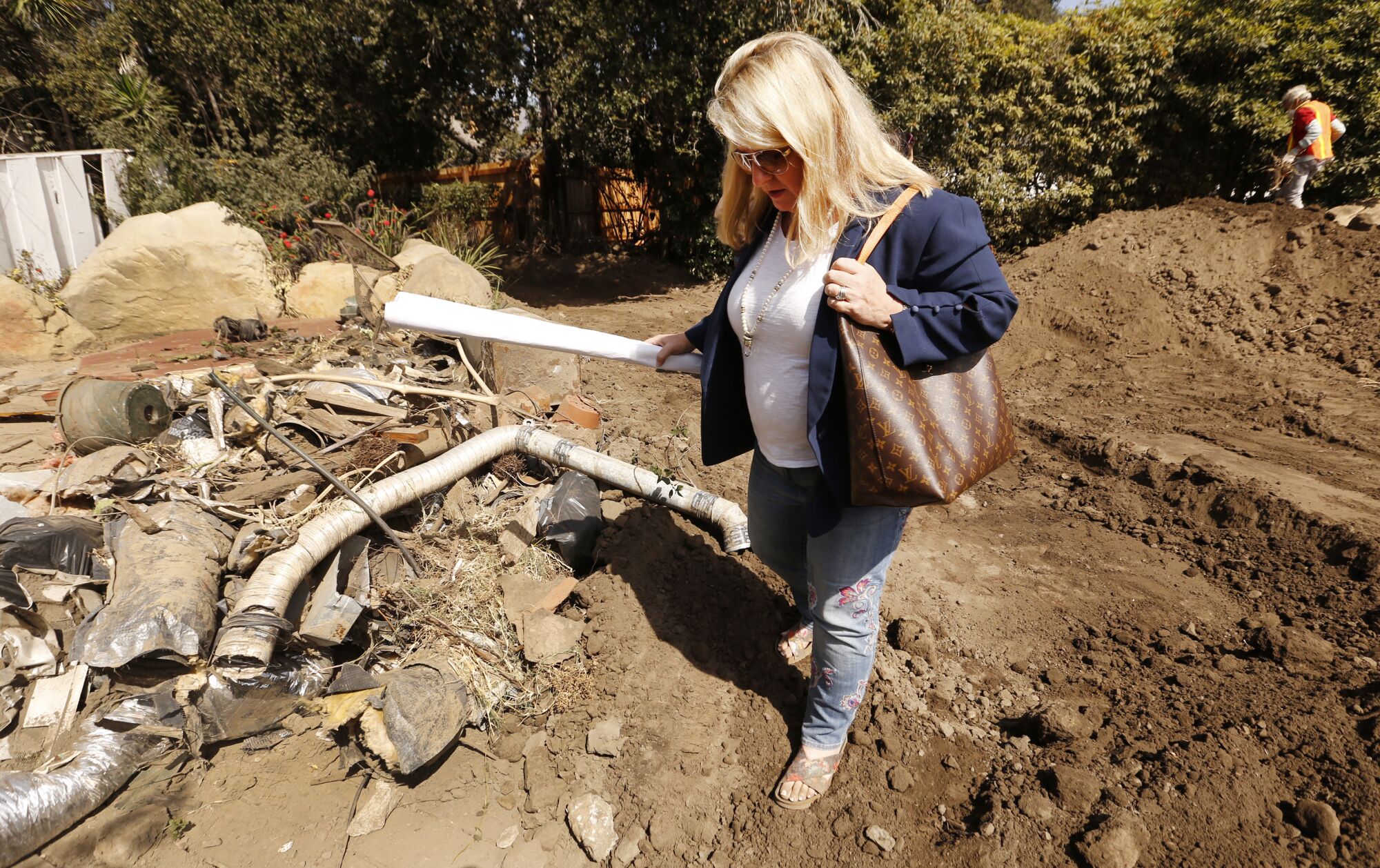 Kim Cantin, whose husband David and son John died in the Montecito mudslide in January 2018, was searching for known items in a pile of rubble behind a Montecito home in September of that year.

With a violent storm returning exactly five years ago to the day her family was torn apart, Cantin couldn’t help but recognize the “cruel trick” the environment was playing on Montecito and its residents.

“Was I nervous? Secure. It brought back how wild Mother Nature can be when things collide. It was very real in the mudslide. I was there. It washed away my home and killed half the family,” she said.

Still, Cantin drives some of the same routes as before, to the grocery store and to the dry cleaner, and Montecito will always be her home.

“I think this area needs to be wary of burn scars and heavy rain and the combination of both and just take precautions. But that doesn’t make it any less heavenly. I think it’s just an evolution,” Cantin said.

And with her daughter going to college, Cantin hasn’t ruled out a return to the mountain town.

“One day maybe I’ll be back in Montecito,” she said. “Right now it’s working for me here. I’m still only 10 minutes away.”

Julia Roberts is blown away when she learns…