How many yottabytes in a quetabyte? Extreme numbers get new names

In the 2030s, the world will generate about a yottabyte of data per year – that’s 1024 bytes, or the amount that would fit on DVDs stacked to Mars. Now, the booming growth of the datasphere has prompted governors of the metric system to agree on new prefixes beyond that magnitude to describe the outrageously large and small.

Representatives from governments around the world voted at the General Conference on Weights and Measures (CGPM) outside Paris on November 18 to introduce four new prefixes into the International System of Units (SI), effective immediately. The prefixes ronna and quetta stand for 1027 and 1030, and ronto and quecto mean 10−27 and 10−30. The earth weighs about a ronnagram, and the mass of an electron is about a quectogram.

This is the first update to the prefix system since 1991, when the organization added zetta (1021), zepto (10−21), yotta (1024), and yocto (10−24). In this case, metrologists adapted to the needs of chemists who were looking for a way to express SI units on the Avogadro number scale—the 6 × 1023 units in a mole, a measure of the amount of substances. The more familiar prefixes peta and exa were added in 1975 (see Extreme Numbers). 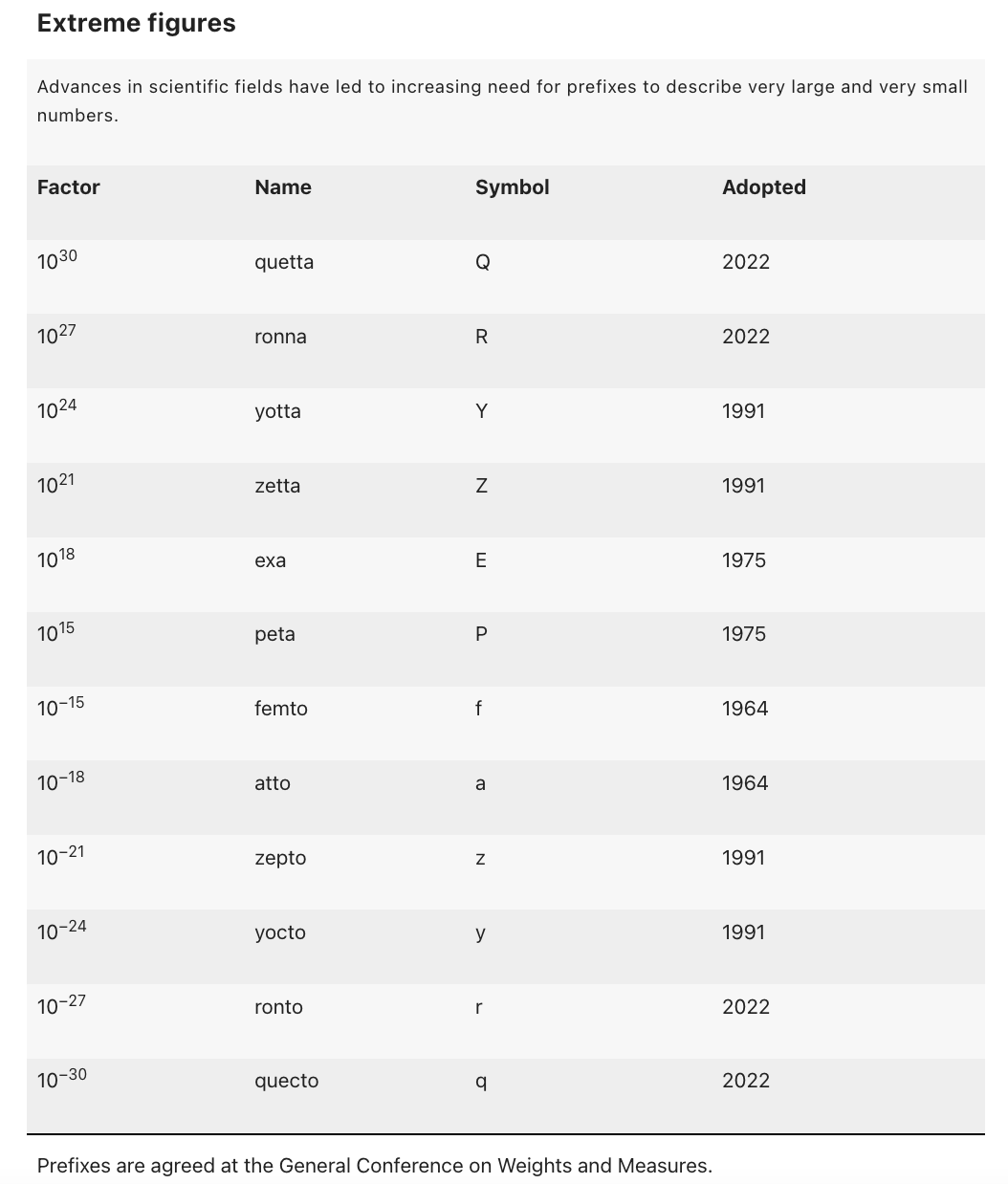 Today, data science is the driver, says Richard Brown, metrologist at the UK National Physical Laboratory in Teddington. He has been working on plans to introduce the latest prefixes for five years and presented the proposal to the CGPM on November 17th. As the volume of data generated annually worldwide had already reached zettabytes, informal proposals for 1027 – including “hella” and “bronto” – began to take hold, he says. For example, Google’s unit converter already tells users that 1,000 yottabytes equal 1 hellabyte, and at least one UK government website gives brontobyte as the correct term.

“From a metrological point of view, I was pretty shocked because these are completely unofficial terms,” ​​says Brown. In the past, unofficial terms were adopted into the SI, he says. The problem with hella and bronto, however, is that their symbols (h and b) are already used in the metric system for other units or prefixes: for example, h stands for hecto (the rarely used 102) and H is henry, the unit of inductance . That’s the main reason why they can’t be considered formal terms, he says. “It’s not necessarily that I want to be a spoilsport, although that’s part of it,” he adds with a smile.

The development of the new prefixes was not easy. Brown looked for words beginning with the only letters not yet used or otherwise excluded as unit symbols or prefixes—r and R, and q and Q. The names came from adhering to precedents established for the most recently added prefixes were introduced. For example, those that multiply numbers like Giga end in ‘a’, while prefixes that describe the smaller end of the scale, like Atto, end in ‘o’. Another was that the words should approximate the sounds of Greek or Latin numbers (ronna and quetta sound a bit like the Greek words for nine and ten, ennea and deka). Brown was forced to drop a previous suggestion of “Quecca” after discovering its proximity to a Portuguese swear word.

The resulting prefixes are “very well thought out” and the result of years of discussion, says Georgette Macdonald, director general of the Canadian Metrology Research Center in Halifax. Crucially, they meet metrologists’ desire for consistency and avoid confusion, she says.

The SI currently only needs new prefixes for large numbers, but it makes sense to introduce corresponding terms for the small end of the scale. “We’re not really sure we’re measuring anything on that scale. But it’s better if the scale is balanced and the prefixes relate to each other in a consistent way,” she says.

Ronna and quetta may sound strange now, but so did Giga and Tera once, says Olivier Pellegrino, a metrologist at the Portuguese Quality Institute in Caparica, Portugal. With practice, they’ll feel normal, he says.

Brown says there are now no more letters of the alphabet to represent new prefixes, so an open question remains as to what will happen when one area of ​​science pushes the scale to the 1033 level. Scientists can always express numbers in powers of 10, but people tend to want a word, Brown says. He would advocate compound prefixes that use two symbols, such as B. Kiloquetta (kQ) instead of branching into different alphabets. “But I think we’re probably a long way from worrying about that,” he adds.

Brown had to jump through so many hurdles to get his proposal approved by the CPGM that he hasn’t allowed himself to imagine the actual terms used, he says. “It’s going to be absolutely amazing.”

This article is reproduced with permission and was first published on November 18, 2022.

Earthquake in Indonesia: 5-year-old rescued after being trapped…