Irish dancing gave me the confidence I never had before

The professor of my communications nodded to me. As a painfully shy 20-year-old, I was sweating and had the urge to run to the bathroom, but was afraid to move and draw attention to myself.

My classmates chimed in in our discussion of the OJ Simpson trial while I remained silent. I was angry at my inability to speak up, but this situation was anything but new.

I grew up in a strictly Catholic home in suburban St. Louis, and when I was 5 years old, an older sibling said, “A little boy in my class talked too much and had his tongue cut out by a nun. ”

I believed my family member. I prayed that God would help me to be good. I tried to follow the rules, never cause trouble, and please my ever weary mother, who had expectations of her three daughters that were appropriate for the 1940s, not the 1980s. Good girls were seen, not heard, followed the commandments of the church, asked no questions, and looked pretty.

In the first grade I had a nun as my main teacher. I was determined to keep my mouth shut, so I didn’t speak. I wanted to be the good guy. I wanted to stay safe. At home, I hid behind the overstuffed chair in the corner of our locked living room. I protected myself from my parents fighting, siblings screaming, and the constant influx of neighbors, relatives, and children from a nearby boarding school for the deaf.

I spoke freely to a handful of people – a cousin who was about my age, some neighbors, two classmates who my mother babysat, and my immediate family. But my cheeks burned and I clung to one side of her as even my aunt tried to interact with me. I dropped my s and r as I spoke because I felt judged. A teacher suggested speech therapy, which Mom dismissed as, “She’s fine – she just talks too fast.” 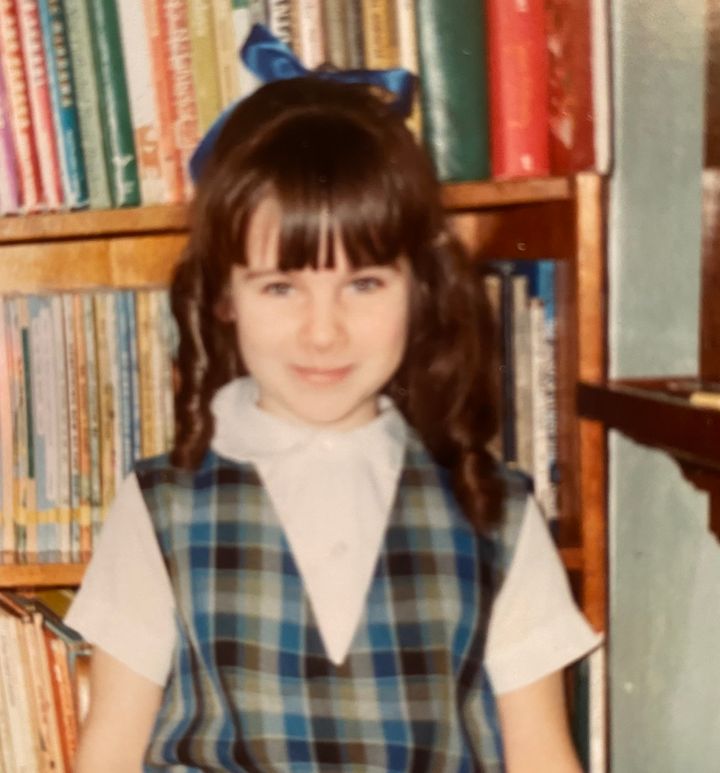 The author in the second grade.

Perfect curls and bows, patent leather shoes and ironed uniforms hid my inner chaos. In the second grade, when the class was penalized for noise, I was singled out for silence and given an extra break. Alone on the playground I felt like a freak. I hated that I couldn’t just talk to the students next to me. I hated the panic that came over me and forced me to pretend everything was fine. But the words faded as I buried myself in it, and physical issues added to my emotional ones. I faked hearing tests and shot my hand in the air while waiting for a beep that never seemed to sound. I didn’t reveal when the words started rippling across my page. (Years later, I got glasses and hearing aids.)

No authority figure questioned what was wrong or suggested therapy to deal with my apparent turmoil, which would now likely be diagnosed as selective mutism, a severe fear that in certain circumstances prohibited me from speaking. Instead, my isolation was rewarded, and my behavior earned me religious awards at school for eight straight years.

I’ve also won many medals through Irish dancing, a hobby I pursued like my older sisters and my mother, who learned the traditional dances growing up in Northern Ireland. Shortly after starting classes, I entered a Feis, a small Irish dance competition. After my mom asked, “Do you need the potty?” I told her “no,” and squeezed my thighs to avoid stressing her. But moments later, as I stood in line on stage waiting for my turn, my attempt failed. My mother grabbed my waist leaving a trail of urine as she rushed us to a restroom. After a quick cleaning, she pushed me back onto the wet stage. I won second place.

The stage soon became my sanctuary, much like the corner behind the big brown chair once did. Up until my period, and I had to hide that too, only a handful of additional accidents happened while dancing at a talent show, another feis, and a St. Paddy’s Day performance. By following my dance teacher’s teachings, I found I could turn off the world and ignore pain. No speaking required. 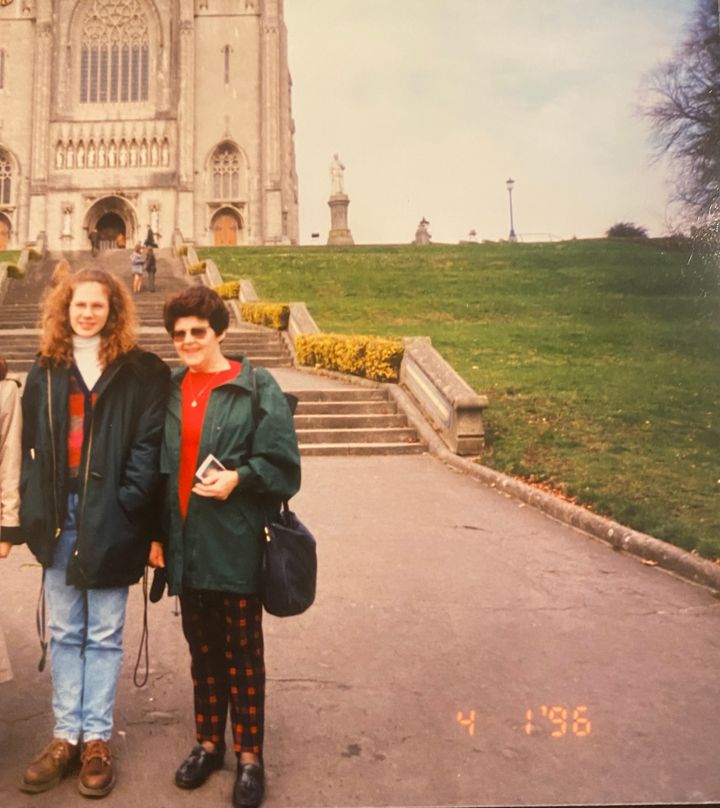 The author and her mother in Ireland during Holy Week while she was still in college. “We made the trip every year in high school and college at Easter time for the World Irish Dance Championships,” she writes.

Later, at a small all-girls Catholic high school, I clung to the two friends I made in the classrooms on day one. They sat in front and behind me and formed a security blanket during my first few minutes at school – one I needed every four years – despite the introduction to their friends. If part of my duo wasn’t present in class, at lunch, or during a study period, anxiety would flare up. I had trouble sharing in class. Frustrated and wanting to shake off my anxiety, I moved to Chicago for college, thinking a fresh start among strangers might be the perfect antidote. I was quickly overwhelmed.

I took trains and buses from Northside to Southside several times a week to take Irish dancing lessons. The expectation of not speaking during class comforted me, especially as I struggled to adjust to my new city and the absence of my cocoon of my small circle of family and friends. Severe chickenpox at 19 left me with red scars and led to questions from strangers like “Have you been in a fire?” which drove me further inside. My big plan to grow into a “normal” person who could speak up when he had something to say failed. Instead, I practiced my dance moves for hours every day, either in class or in the corner of my college gym’s basement, and life revolved around three major competitions a year.

After graduating I moved to New York for law school and found a new Irish dance studio to escape to. Weeks into my second semester, I received an unexpected offer to join the chorus of Michael Flatley’s Lord of the Dance, an Irish dance extravaganza touring North America. I studied a VHS of the show, joined the cast in Virginia, and performed to thunderous music and thousands of applause. As if on cue, I ripped off my dress to reveal a pair of black hot pants and a tiny top underneath, transforming my stage persona from prudish to powerful. The roar in the arena was unlike anything I had ever experienced before. “You were brilliant,” my show’s star dancer told me. Back at the hotel, I spent nights in my room watching TV, applying fake tans, and washing wigs.

The author at an Irish dance competition in 1997.

I continued to work on my technique and stage presence. The effect I had on others through moving my body was a revelation. I felt so alive and confident that I volunteered to do the show’s sultry number in a beautiful purple lace dress. Little did I know my gaze and shoulder rolls could draw so much attention. Little did I know that the long toe loops across the stage could ignite a fire in me. Little did I know how much I would love to express this side of myself, all within the comfort of precise parameters and without breaking any rules. I did exactly what I was supposed to do and it was nothing short of exhilarating.

My dance captain said my dancing had “grown by leaps and bounds”. My socializing did, too, especially after a busy week in Detroit when I joined the cast at a pub that was serving free mudslides that my 23-year-old self didn’t know was going to be this strong. Pent-up fear and frustration flew out of my mouth as I told the male lead, “You know, you’re not really the Lord — it’s just a part.” He laughed (to my immense relief when I realized what I was saying had). As the tour went on I skipped the nights alone in my hotel room for more pub nights with the cast. I organized site seeing adventures. A local TV show in St.Louis interviewed me when we were performing at the Fox Theater.

When my mother came to see me perform, she said to me, “You’d better leave that on stage.”

When I was asked to audition for my dream lead role as Morrighan, The Temptress, I called home. “Can’t You Be the Good Girl (The Alternate Female Role)?” asked mom.

I was devastated, but knew that her ultra-conservative upbringing had created strict standards of acceptable behavior that she imposed on me. Under her supervision, she forbade any sexual expression. She would have loved it if I had entered the convent instead of dancing provocatively in red spandex. But that wasn’t her show anymore. it was my life In my first performance as a “bad girl,” I strutted around the stage and winked at my mom and dad, who were sitting in the orchestra. My parents finally knew what it had taken me years to discover: I had a voice and body that gave me power—and I wasn’t afraid to use it anymore. 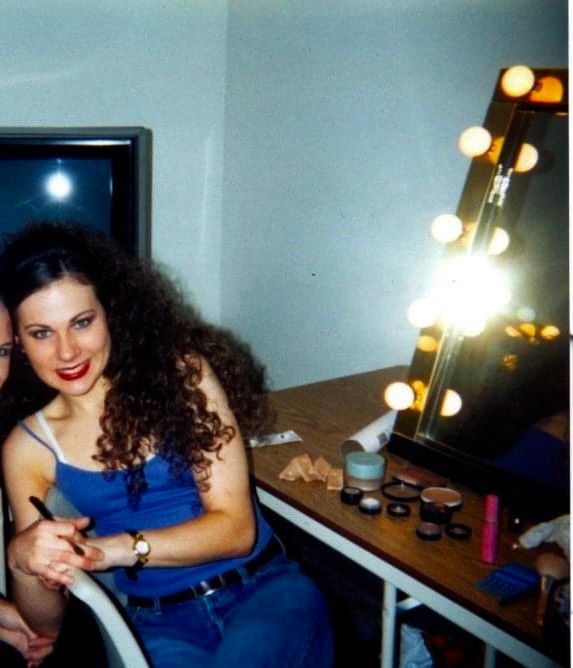 The author was preparing for Lord of the Dance backstage at a Chicago theater in 1998.

Instead of an escape, dance was now the vehicle that allowed me to change the way I saw and knew myself. It became clear that all the years of silence were about fear. I was petrified that I would do or say something wrong and disappoint my mother and everyone she cherished. The pressure to be perfect in her eyes stole my voice and forced me to be the “good girl” for years. But dancing finally gave me the confidence to be myself. I realized that their rules no longer applied. My self-expression mattered. So did my connection to my mind and body. I was transformed And suddenly everything became colourful.

During a stay at my parents’ house after I left the show and resumed law school, an older cousin sat next to me. “I don’t remember you speaking,” she said.

“Now she won’t shut up,” my mother called from the kitchen.

Tess Clarkson, a former professional Irish dancer (“Riverdance” on Broadway and Michael Flatley’s productions) and financial regulation attorney, lives in Missouri with her husband. Her essays have appeared in HuffPost, The Washington Post, The Independent, and others. She is a certified yogi, astrologer and end-of-life doula working on her memoir. You can find her at www.tessclarkson.com and on Instagram at Tessclarkson7.

Have a compelling personal story you’d like to see published on HuffPost? Find out what we’re looking for here and send us a pitch.

Gisele Bundchen meditates and recharges on vacation with…