Many patients do not receive hepatitis C medication

Michael Mendez said when he found out he had hepatitis C, “I didn’t even know what it was.”

Homeless in Los Angeles for years, Mendez, 47, says he hasn’t seen a doctor the entire time he’s been living on the streets. When Mendez got a roof over his head at the Arroyo Seco Tiny Home Village, he decided to stop at UCLA Health’s mobile clinic, which wheeled to the Highland Park grounds weekly — and soon learned of the infection that could endanger his life.

Hepatitis C, which spreads through infected blood, causes about 14,000 deaths annually across the country, according to federal figures. Doctors describe it as a slow and stealthy killer that can take years to show any symptoms. In some cases, the virus can go away on its own, but if left untreated, infection can also lead to liver disease and cancer.

“If it wasn’t for them, I still would have,” said Mendez, who was able to be treated through the mobile program. “And I wouldn’t know what’s wrong with me.”

Today, in most cases, hepatitis C can be cured by taking direct-acting antiviral drugs for two to three months. Yet only a fraction of people in the United States who are diagnosed with an infection start taking the pills right away. Researchers from the US Centers for Disease Control and Prevention found that only about a third of privately insured patients and a quarter of Medicaid-covered patients started it within about a year of diagnosis.

Being able to cure hepatitis C “is one of the biggest and most exciting developments in medical research in the last 15 years — and most people haven’t heard of it,” said Dr. Francis Collins, former director of the National Institutes of Health. told journalists this fall. The newer drugs cure most patients, “and the side effects are essentially negligible.”

“So what the hell?” said Collins. “Why do we still have 2.5 million people who haven’t had a chance to get tested and treated? Well, it’s up to our healthcare system.”

In a later interview, Collins criticized a “complicated combination” of factors. Costs that caused insurance programs to erect barriers. A series of steps to being treated that can become stumbling blocks, especially for people who are disconnected from medical care. Other experts have criticized a lack of public investment and ongoing misunderstandings among doctors about the treatment.

The virus has disproportionately hit marginalized groups, including people who inject drugs, are incarcerated or are homeless. A UCLA study published more than a decade ago found that more than a quarter of unaccommodated adults on LA’s Skid Row were infected. Almost half of them had no idea, the study found.

Millions of people across the country are thought to have hepatitis C, but many don’t know it. A national study from 2011 to 2016 found that fewer than half of people infected with the virus knew about it.

The virus wasn’t identified until 1989, which meant some people became infected through blood transfusions or other exposures before the threat was understood. It can spread through shared needles or other drug-injecting devices, which the CDC says is a leading cause of new infections. Experts have estimated that more than 40% of people who inject drugs have hepatitis C. Babies can also get it at birth from an infected mother, and the virus can also spread through unhygienic tattoos or sharing blood-contaminated items, such as razors.

When the new drugs came along, health systems like Kaiser Permanente Southern California and Veterans Affairs were able to reach out to members who had been diagnosed with the disease and offer them the pills, but “there’s just no way you can do that with the Medicaid population.” . said dr Prabhu Gounder, medical director of the Division of Viral Hepatitis and Respiratory Diseases at the Los Angeles County Department of Health.

“For the past 10 years, the strategy has been ‘okay, let’s take these people to their doctor,'” said Dr. Jeffrey Klausner, an infectious disease specialist at USC’s Keck School of Medicine. “In fact, we know that many people do not have a doctor or that it is too difficult to get access to a doctor. Or they go to some doctors – and the doctors don’t know how to treat them.”

The California Department of Health said it didn’t know what percentage of Californians infected with the virus had received antiviral treatment. In January 2022, California began requiring clinics and other primary healthcare providers to routinely offer screening for hepatitis C and follow-up for those who test positive, but Gounder questioned whether the requirement was widely followed because “there is no enforcement behind it.” ”

Experts say that many family doctors still unnecessarily refer hepatitis patients to specialists. Sonia Canzater, director of the Hepatitis Policy Project at the O’Neill Institute, said some doctors may have lasting memories of the earlier, much more complicated treatments that “were associated with myriad side effects.”

Treating hepatitis C is now “easier than diabetes. It’s easier than high blood pressure,” said Dr. Norah Terrault, Keck’s chief of gastroenterology and liver disease, who created a program to teach primary care physicians how to treat the disease. Many mistakenly believe that evaluating patients for treatment is complicated and “it’s so difficult to get them in the door.” But once they treat their first patient and they’re like, ‘Oh my God, I just healed someone and it was so easy,’ then they become advocates.”

Still, getting through the steps to healing can be a barrier for patients, especially if they don’t have transportation or time to go to a clinic, or are afraid of leaving their belongings at a homeless camp. If a rapid test is positive, further blood tests are needed to check whether the infection is current or old antibodies. Some patients may also need an ultrasound.

At Highland Park, Mendez was treated as part of a study evaluating the effectiveness of a “one-stop” mobile unit to connect people who inject drugs with health services, including treatment for hepatitis C.

For the program’s patients, “there is no lack of interest” in the cure, said Dr. David Goodman-Meza, UCLA assistant professor and principal investigator for the Los Angeles sites on the study. “It’s the difficulty of navigating the system.”

Mendez was able to have blood drawn in the mobile unit. He had a virtual visit with a UCLA hepatologist. The pills were brought to him. Mendez said if he had to make it to more distant clinic appointments, he probably wouldn’t have made it through the process. 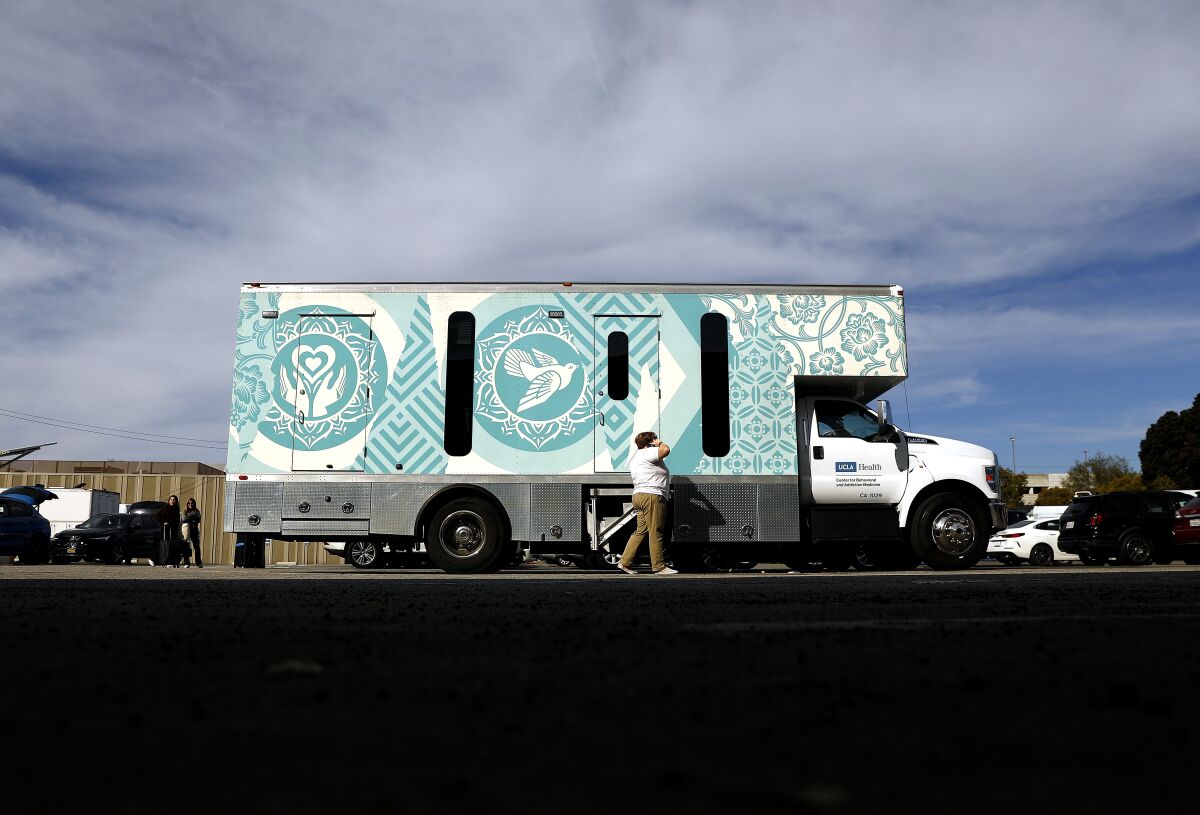 When the pills first came out, they were extremely expensive – sometimes over $80,000 for the treatment of each patient. Insurers limited who could receive them. In many states, Medicaid programs didn’t allow patients to start treatment until there was a minimal level of liver scarring, a rule Canzater said “wait until you only have one lung left to give you chemotherapy.”

Prison systems also restricted access to the cure pills, medical news agency STAT reported: More than 1,000 people in state prisons across the country died from complications of the virus in the six years after the drug became available, their investigation found. Some health insurance companies also require that patients have stopped consuming drugs or alcohol or may only have the medication prescribed by specialists.

In San Diego, Dr. Christian Ramers said he was turned down dozens of times by insurers when he first tried to prescribe the drug at a community clinic operated by Family Health Centers of San Diego in the basement of a homeless shelter.

“I am able to treat hepatitis C. They already have cirrhosis, so they’re in bad shape. And I’m forced to refer her to another specialist,” said Ramers, an infectious disease specialist. “It just got weird and ridiculous. … The whole system was set up not to treat people.”

In California, many of those barriers to Medi-Cal patients were removed after doctors like Ramers testified in Sacramento. Restrictions still exist in many states’ Medicaid programs, although they became less prevalent between 2014 and 2022, researchers from Harvard and the National Viral Hepatitis Roundtable found.

The cost of the drugs has also fallen significantly, according to experts, with treatment courses now ranging from about $20,000 to $30,000, although Collins said that’s still high for many public programs.

But Ramers said COVID-19 has come “at the worst possible time for the hepatitis C elimination movement.” Testing and treatment for hepatitis C stopped when the pandemic began, a national study published in the American Journal of Preventive Medicine found. Inside the mobile clinic at UCLA Health.

More than a third of California health and social care providers surveyed by the California HIV/AIDS Policy Research Centers in spring 2020 said they had scaled back or suspended their hepatitis C testing; As of fall 2021, more than a quarter still said they had done fewer viral hepatitis tests.

Collins, a special projects adviser to President Biden, has been working on a national initiative to combat the threat. He wants to ensure “point-of-care testing” so people can start treatment the same day, increase physician training and reduce drug costs.

He argued that an upfront investment in curing the virus would save on the later costs of cirrhosis and cancer: A recent study analyzing the Veterans Affairs system estimated that each hepatitis C patient’s treatment increased over time would save than $62,000.

At Highland Park, Mendez is awaiting another blood test to confirm he is cured. He has told friends about the UCLA mobile program and the pills that can wipe out hepatitis C, urging them to “jump on it as soon as possible.”

How a secret message in a Colombian song…