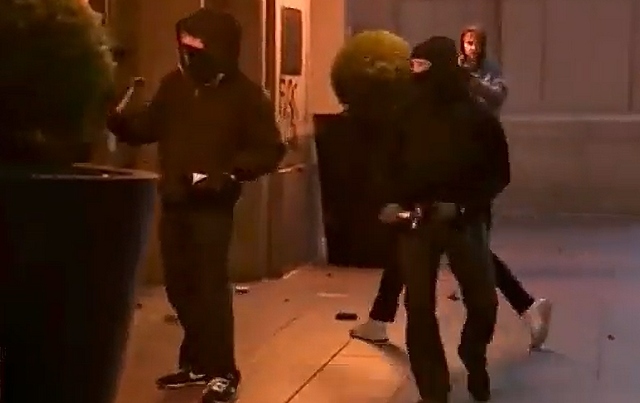 (Natural News) Once again, the left-wing Democrat-supporting organization collectively known as “mainstream media” has asked viewers not to believe what they see on screen during a report on riots that took place in Atlanta over the weekend saw antifa thug was shot dead by police.

A local Fox crew conjured up memories of a CNN report from Minneapolis, Minnesota just days after drug addict and criminal George Floyd died while resisting an arrest in which the correspondent stood in front of several buildings literally ablaze stood and talked about the “mostly peaceful protests” that took place in the city. Before all was said and done, whole blocks of the city were burned or destroyed, including a police station.

“A local Atlanta reporter called the Atlanta protest a ‘largely peaceful protest’ as a police cruiser burned in the background. You can’t make that up,” one Twitter user noted in a post featuring the offending video clip.

Local Atlanta reporters are calling the Atlanta protest a “largely peaceful protest” as a police cruiser is ablaze in the background.

You can’t invent this stuff. pic.twitter.com/tYJpJulxdH

Red State explained the origin of the protest:

Now the night began with a protest against the police in memory of one of their comrades, Manuel Teran. Teran had been shot dead by police after allegedly shooting dead a police officer when police arrived to evict protesters from an area they occupied where the city is building a police training center. The radicals have arrested several people in multiple domestic terrorism incidents at the site, including throwing Molotov cocktails at police.

Notice how everyone is dressed in black and masked – this is not a protest turned into a riot by mistake. It’s like most Antifa actions; it is a “protest” in anticipation of insurrection, when people break free and then attack things.

?#BREAK: Violent protests have been reported from Atlanta

Violent protests have erupted in Atlanta tonight after police killed a man on the 18th. There are reports of police cruisers burning and stones being thrown as activists call for a “night of rage”. pic.twitter.com/qKTc20g79n

Needless to say, this “mostly peaceful protest” soon turned violent — as had been planned all along — with Antifa rioters attacking the Atlanta Police Foundation building as well as other businesses and setting at least one police vehicle on fire, as in the background seen is the local news report.

Journalist Andy Ngo, a veteran of the Antifa protests, also noted the violence and singled out the leftists who initially attacked the police at the new training ground. “A news crew captured footage of #Antifa Militants on Saturday destroyed businesses in downtown Atlanta in their violent organized “retaliation” against police for shooting dead their gunman comrade. The gunman in the autonomous zone shot dead a state police officer,” he reported.

A news crew captured footage of it #Antifa Militants on Saturday destroyed businesses in downtown Atlanta in their violent organized “retaliation” against police for shooting dead their gunman comrade. The gunman in the autonomous zone shot dead a state police officer. pic.twitter.com/ow0drWxolg

Despite what the local media jerks reported, the Atlanta mayor was quick to refute claims of the “largely peaceful protest.” He noted that most were from out of town – not even from the city or even the region – and some were in possession of explosives, proving again that it would never be a simple “protest”.

“Yes, you heard that right, explosives,” Dickens said. That led to a police officer’s car being set on fire, Dickens explained. “Make no mistake, these individuals have caused damage to people and property.”

MAYOR ANDRE DICKENS: “You heard that right, explosives” @CityofAtlanta Mayor Andre Dickens says some of the protesters were carrying explosives. Listen to this clip from today’s press conference. pic.twitter.com/nyXAld0rYS

Antifa is a domestic terrorist group and should be treated – and prosecuted – as one.