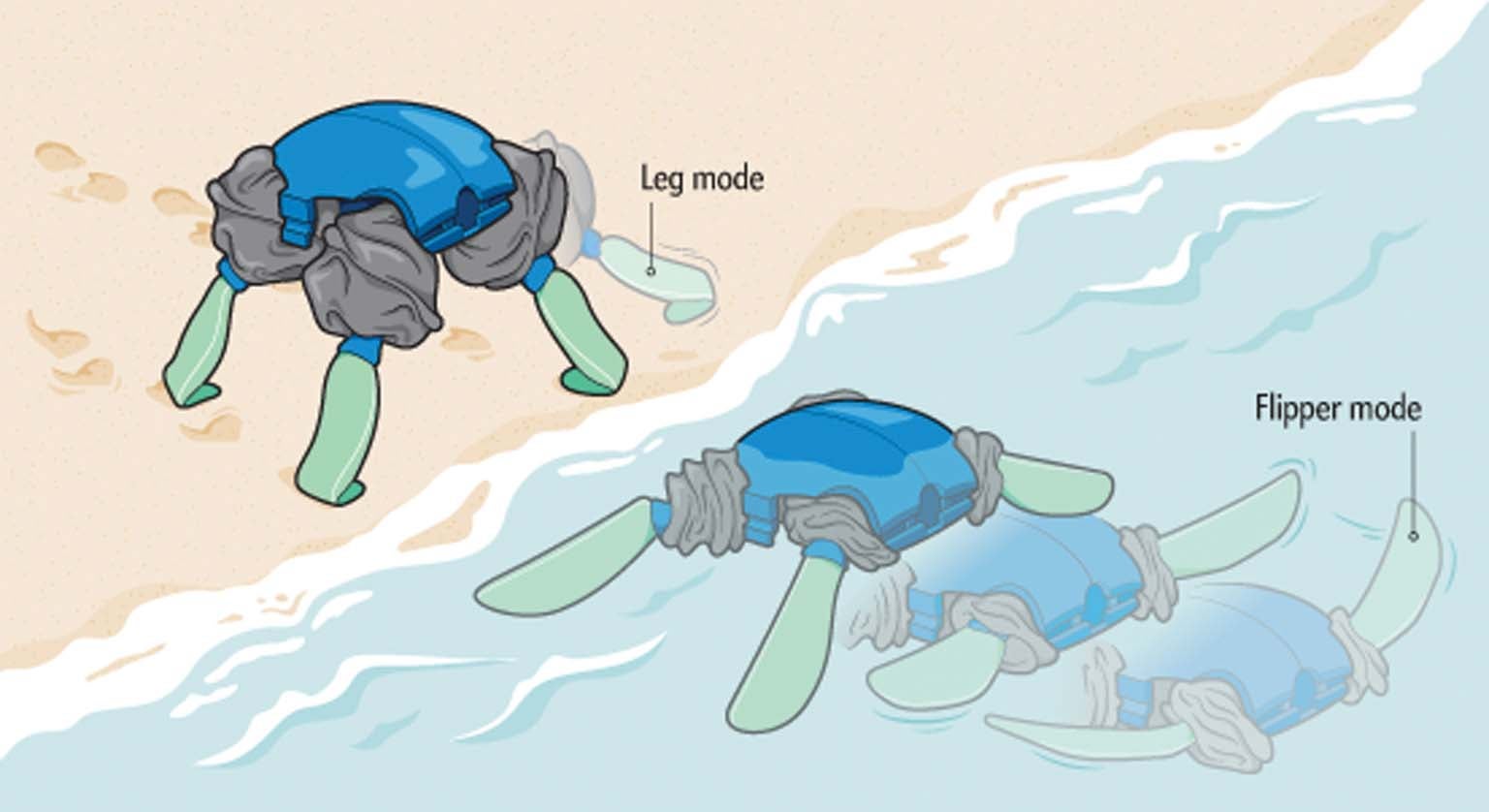 Recently described in Nature, the Amphibious Robotic Turtle (ART) combines the best mobility traits of a sea turtle and a tortoise, and can transform its limbs from turtle-like flippers into turtle-like legs. “Most amphibious robots … use dedicated propulsion systems in each environment,” says roboticist Rebecca Kramer-Bottiglio of Yale University, the paper’s senior author. “Our system adapts a single unified propulsion mechanism for both environments: It has four limbs, and those limbs can switch between a fin state for water locomotion and a leg state for land locomotion.”

Each morphing limb is surrounded by a composite polymer material that is malleable when hot and rigid when cold. To change the shape of the limb, the built-in copper heaters heat and soften the outer material. Then a soft robotic “muscle” underneath swells or deflates, shifting a flat fin into a rounded leg, or vice versa. Finally, the polymer cools and hardens around the new shape within a minute or two. The soft robotic limbs attach to more traditional “hard” robotic shoulder joints that contain three electronic motors, allowing ART to “crawl” or “crawl” on land and “paddle” or “slap” in the water. These connections are connected to a modular chassis in which sealed PVC tubing protects the robot’s electronic components from water. A 3-D printed “shell” gives the robot a streamlined shape and space that can hold air or ballast to adjust buoyancy.

The integration of both soft and traditional robotics gives ART its transformative power, says Tønnes Nygaard, a roboticist at Oslo Metropolitan University who did not contribute to the new study. “Very strict, rigid modes of locomotion [are] a necessity when using traditional robotic techniques,” he adds. “But now you can make something more fluid with techniques like these from soft robotics.”

Such adaptive techniques could eventually help robots wander across the many different surfaces and environments found in the real world without having to carry an additional propulsion system that could move them less efficiently. Kramer-Bottiglio’s team found that ART uses about the same amount of energy as robots built for just one environment.

The robot turtle isn’t there yet: the current prototype still needs a rope to provide power and communications, and its movements are slow and clumsy. But researchers are working to improve these problems. “I’m very excited to see how far they’ve come,” says Nygaard. “And I’m very excited to see what will come out of this group in a few years.”

New York lawmakers become the best-paid in the…