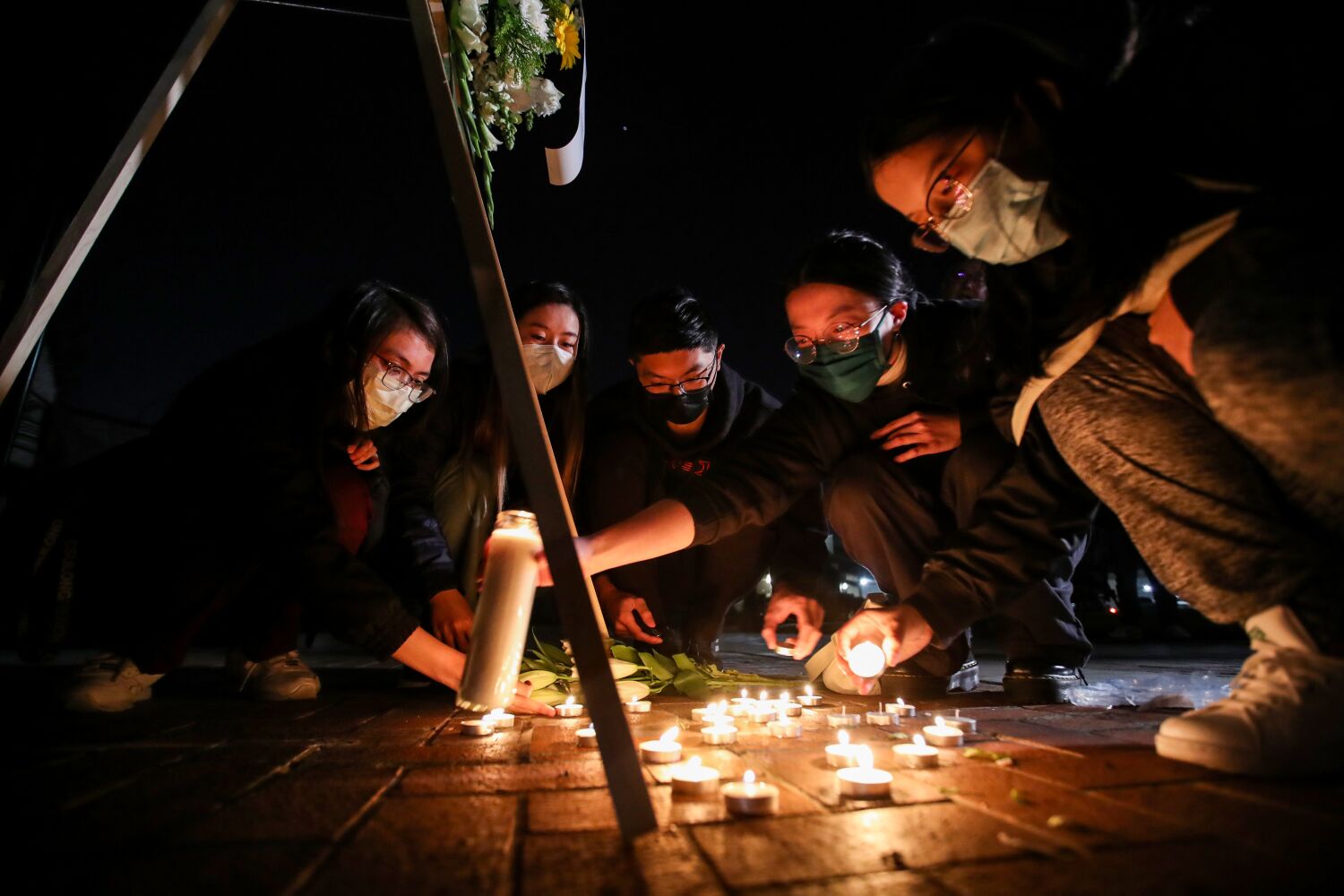 As investigators scoured Southern California for anything to explain the deadliest US mass shooting in months, more than 100 mourners gathered Monday night for a vigil in Monterey Park that served as a sober contrast to the season’s usual New Year celebrations.

They gathered in the small public park in front of the Civic Center and stood in silence, lost in the grief that had brought them together. Strangers, now joined in grief, sought solace and solidarity in each other’s company and in the tacit belief that the aftermath of tragedy should not be experienced alone.

Chuching Wang, President of Taiwan Benevolent Assn. from California and co-organizer of the vigil, said the idea for the gathering came after a conversation with friends, who described their frustration that a time of joy and family during the Lunar New Year was overshadowed by the shooting. He thought it better to gather as a community.

“It’s kind of a part of the coping process,” he said.

Those gathered came to pay their respects to the 11 dead and nine wounded in Saturday night’s shooting at a dance studio in Monterey Park and to join in the mourning following the attack.

“It has something to do with being with other people who are just as sad as you are,” said Enrique Hernandez, who traveled by bike. “You don’t feel so alone.”

He grabbed the handlebars of his bike. “That man must have been so full of hate to go into a store and just shoot people like that.”

Hernandez stared up at the US and California flags, which hung at half-mast. Between them was a heart-shaped wreath of white roses. There were red balloons, bouquets of flowers, candles – and 11 blue hearts cut out of wood, inscribed with a verse from the Gospel of Matthew.

Blessed are the mourners for they are comforted.

Nearby, a woman was talking to a reporter. “It was so out of the blue,” she said. One man carried a handwritten sign that read, “The problem is guns.”

The Star Ballroom Dance Studio violence, perpetrated by 72-year-old Huu Can Tran, was one of the worst mass shootings in Los Angeles County and the deadliest in the United States since a gunman stormed an elementary school in Uvalde, Texas, before almost eight months, killed 19 children and two teachers.

Wrapped up against the cold as temperatures plummeted into the 50s, Monterey Park’s mourners began to arrive at dusk. Their presence was reminiscent of other memorial services held after other tragedies, each reflecting the unique character and heartache of their communities.

Their number grew. They brought pets and children, were young and old, and represented a mix of diverse backgrounds wanting to show their respect to this predominantly Asian-American community in the San Gabriel Valley.

Like Hernandez, they tried to understand the futility of murder.

“You never expected people to die before their New Year,” said Johnson Chan, 66, of Monterey Park, who came to the vigil with his wife, Catherine.

Monterey Park’s Julie Zhu described the shooting as a tragedy not only for the Chinese diaspora but also for the larger Asian community.

We are all “focusing on this tragedy,” said Zhu, who shared that she is of Japanese descent. She looked around the crowd and found solace in the turnout.

“I just want to show my support to the community and let them know they are not alone. … We will protect each other, and we will also just pray for each other, and we hope that this fellowship will end this kind of tragedy and we can live in peace.”

Alan Kobayashi, 65, of Eagle Rock, admitted investigators may never fully understand the motive of the shooter who died from a self-inflicted gunshot wound in a Torrance mall parking lot. The dance studio shoot, he said, “makes you shiver, but I’m so happy to see so many people.”

Just after 7 p.m. Rep. Judy Chu (D-Monterey Park) addressed the crowd. She reminded the community to support the families of the victims and those seriously injured in the hospital.

Reaffirming her faith in the city, she ended her comments with a show of strength.

Later that evening, news began to spread of another massacre in northern California that killed at least seven people in two related shootings in rural Half Moon Bay.

Still on his bike, Hernandez could only look down and shake his head.

“Too much bloodshed,” he said.