P-22, the famous mountain lion of Los Angeles, has died

Mountain lion P-22, who lived in the heart of Los Angeles for more than a decade and became the face of an international campaign to save California’s endangered cougar population, was “compassionately euthanized” Saturday morning, according to the California Dept. of Director of Fish & Wildlife, for the serious injuries he sustained earlier this week.

Wildlife biologists with the National Park Service and the state wildlife agency captured the mountain lion in December after it showed increasing “signs of distress,” including three attacks on dogs in a month and several near misses with passers-by in Los Feliz and Silver Lake. Scientists tracked the cat to a Los Feliz backyard, where it may have been hiding after being hit by a car.

A series of health checks revealed P-22 to be significantly underweight, with a thinning coat and damage to his right eye, possibly from a car accident. A local animal welfare agency had received a call reporting a vehicle collision with a mountain lion, and the P-22’s radio collar placed it near the intersection where the accident was reported, officials said. 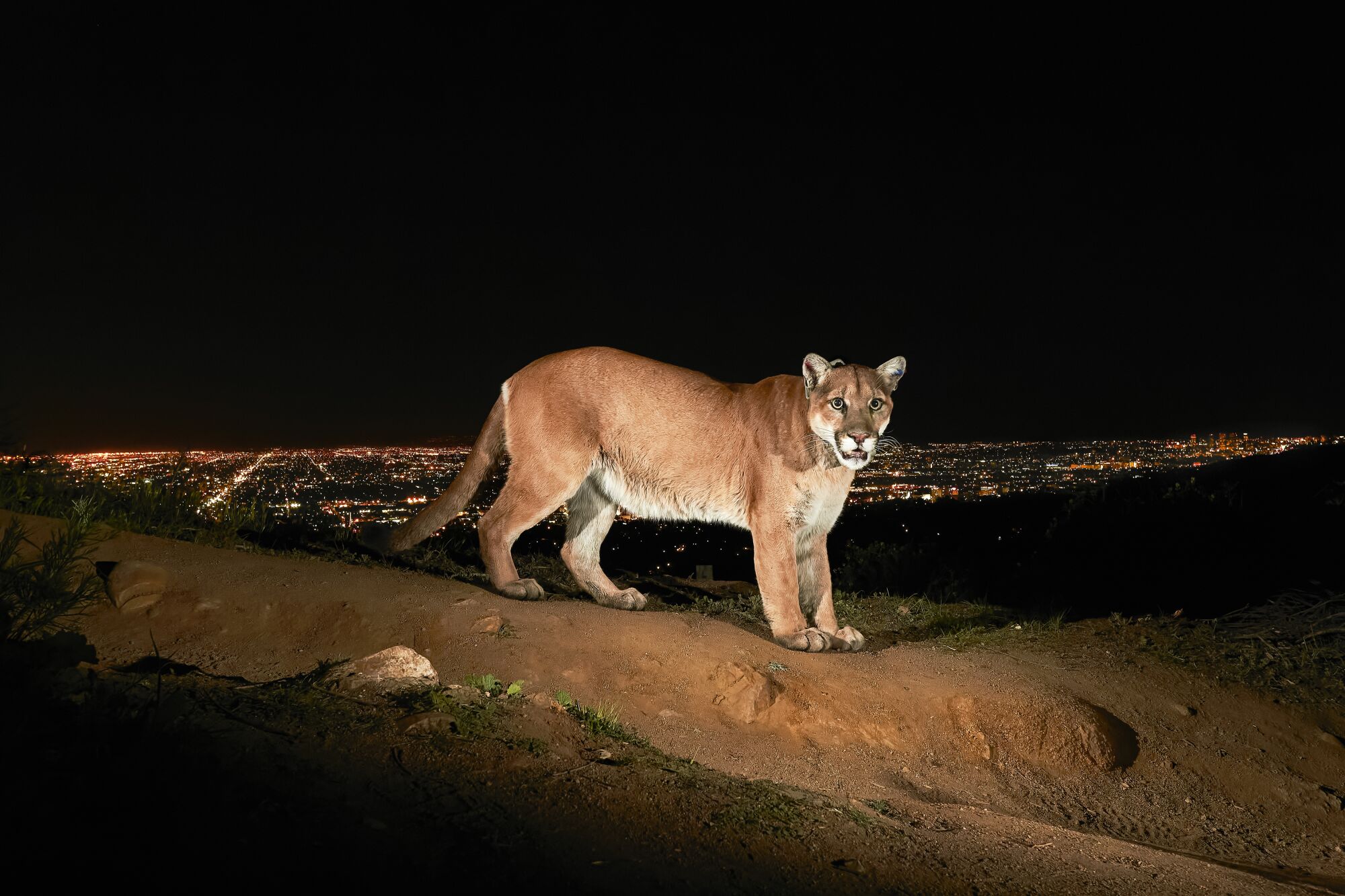 The mountain lion was not healthy enough to be released back into Griffith Park, state wildlife officials said. Advocates, scientists and local residents had hoped the beloved animal would be healthy enough to retire to a wildlife sanctuary.

P-22 surprised the world in 2012 when its fluffy hindquarters and black-tipped tail appeared in a photo captured by a motion-sensing camera in Griffith Park. The adolescent cat had made an unlikely journey to Griffith Park from its probable birthplace in the Santa Monica Mountains, traveled through the Hollywood Hills and via the 405 and 101 freeways.

P-22 was first introduced to the world in a Los Angeles Times story. The big cat soon became a real celebrity, appearing in a National Geographic glossy film that showed the mountain lion slinking past the Hollywood sign at night, muscles rippling under its tawny fur.

Scientists assumed the apex predator would move on in search of a mate and more room to roam. Instead, the unruly cat stayed in Los Feliz for more than 10 years, feeding on mule deer and raccoons and occasionally popping up on video doorbell cameras on quiet, hilly streets near the park. The cat lived alone and, as far as scientists can tell, never mated.

Catching a glimpse of P-22 on a late-night foray has become one of the most sought-after celebrity sightings in Los Angeles.

Like many cougars, sometimes referred to as “ghost cats,” P-22 was naturally shy. For years, he preferred the park’s dark canyons and hills—and sometimes a dark sidewalk—to the populated areas. But he had recently begun to venture deeper into LA, migrating south as far as Silver Lake and staying in residential areas for long periods of time.

Those forays have coincided with an increase in clashes with people, including attacking three dogs in one month and chasing a man and his dog up a set of steps and into their home in Silver Lake, wildlife officials said.

The discovery of P-22 in the park in 2012 led to one of the most unusual elements of its life: the city grabbed its site rather than demanding that it be removed. Big cats roam much of the United States, but few cities would allow a puma to live in their midst, let alone stay a decade.

Many Angelenos envisioned themselves in P-22, an aging bachelor, accustomed to cramped urban space, waiting for a mate who might never arrive. Others identified with his story, crossing borders and highways in search of a place to call home.

“Crossing the border, being followed in some areas of the country — people feel connected to that,” said Miguel Ordeñana, the scientist who first spotted P-22, in a 2022 interview.

P-22 achieved the enduring fame that most Angelenos can only dream of. His photogenic face, including dark markings around his eyes resembling eyeliner, appeared in a documentary and exhibit at Los Angeles County’s Natural History Museum. The big cat was featured on socks, tattoos and bumper stickers. And by order of the City Council, every October 22 was celebrated as “P-22 Day.”

The presence of P-22s in Griffith Park was a reminder that Los Angeles is much wilder than it appears, with one of the highest biodiversity of any major city in North America. The big cat’s isolation in the park, surrounded by freeways, helped him become the flagship cat for the “Save LA Cougars” conservation campaign.

The 101 Freeway forms a nearly impenetrable barrier to the threatened cougar population in the Santa Monica Mountains, cutting them off from a larger gene pool to the north. This has led to inbreeding, which has caused genetic abnormalities and could lead to infertility.

Recent scientific modeling has drawn a grim conclusion: Without intervention, the mountain cougars of Santa Monica and Santa Ana could become extinct within 50 years.

California conservationists spent more than a decade raising $77 million in private donations and government funds for a wildlife bridge over a 10-lane stretch of 101 in Agoura Hills that they hope will expand the breed’s gene pool . P-22’s plight, alone in a tiny freeway-fenced area, attracted support from around the world, including Leonardo DiCaprio’s charity foundation.

The state broke ground on the wildlife bridge in April. Its presence, proponents say, may be P-22’s most enduring contribution.

“Its history of being isolated and trapped really got people to see why such a crossing was necessary, more so than any scientific work,” said Beth Pratt, a regional executive director of the National Wildlife Federation in California, who said himself called agent of P-22. “He changed the world for his own kind.”

Cougars are so aloof they are sometimes referred to as “ghost cats,” and P-22s often went unnoticed for days. But there were also high-profile hijinks.

About two years after arriving at the park, P-22 appeared on wildlife camera footage looking gaunt, his tail as thin as a pipe cleaner. The NPS captured him and treated him with topical medications and vitamin K injections, then released him.

Tests later confirmed that P-22 had been exposed to rat poison and suffered from mange, a parasitic mite. The photo, released of the big cat while ill, went viral and showed the once-pretty face dirty, eyes droopy.

The image helped spur action in the California Legislature, eventually leading to a 2020 law temporarily banning some types of rat poison.

A few months later, a home security contractor found the cat in a crawl space under a home in the Los Feliz hills. Helicopters soon hovered over the street, covering the incident like an FBI raid. A local news station added a caption that yelled, “BREAKING NEWS: P-22 TRAPPED INSIDE HOME.”

When officers finally cleared the area, P-22 slipped back into Griffith Park unseen.

In 2016, P-22 became the prime suspect in the death of a 14-year-old koala named Killarney, whose mutilated body was found about 400 yards from her enclosure at the Los Angeles Zoo. The attack was not recorded, but the zoo’s surveillance cameras placed the cougar at the scene. Few animals can easily leap an 8-foot fence topped with barbed wire.

After the attack, a city councilor suggested moving P-22 to new habitat, saying Griffith Park was “ultimately not suitable for him.” But where the cougar might go hampered the discussion. Relocating P-22s to a mountainous area already occupied by another mountain lion could be a death sentence, as the big cats kill to protect their territory.

HOSPITALS ARE being staffed with every room and…