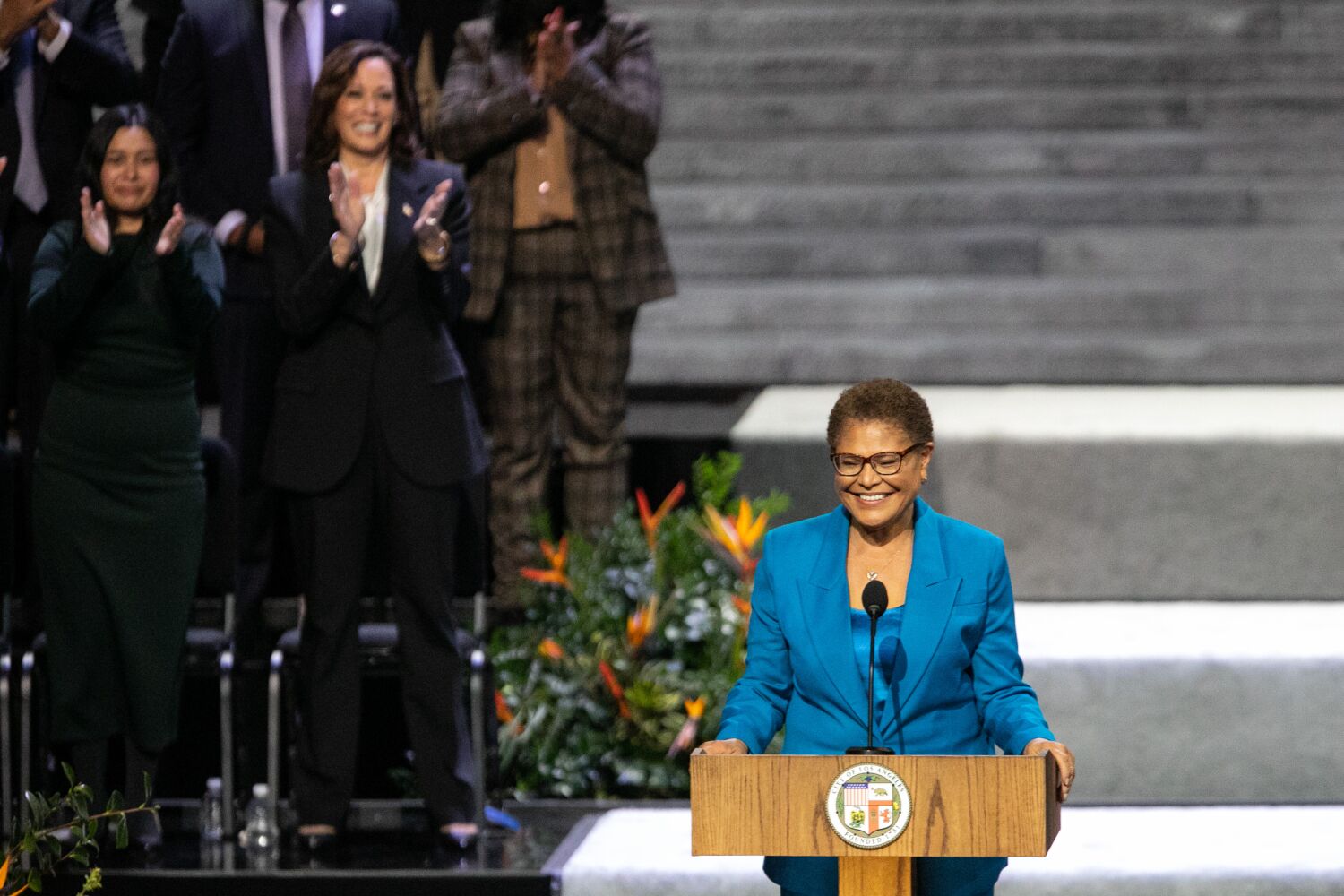 If last week was any indication, Mayor Karen Bass is beginning her term with a tailwind.

A clear sign came when her campaign promise to declare a state of emergency for the homeless made its way through the city council and was accepted by a body that is normally unwilling to cede power. Council members’ approval gave the mayor increased control over the city’s response to the homeless crisis.

This early victory for Bass reflects a political reality highlighted by a new poll of the city’s voters: The mayor has more support than the city council, and a multitude of voters believe she can help address the city’s problems with homelessness and housing can tackle.

The poll found the 15-member councilor to be deeply unpopular after several years of scandals, indictments, lawsuits and, this fall, the release of a recording of three councilors making racist comments in a private meeting. A suspended member is awaiting trial. Two former members have either pleaded guilty or are awaiting trial themselves. Two incumbents lost their seats this year due to the wave of discontent that resulted from the city’s inability to adequately address the homelessness crisis.

The poll is generally positive for Bass, but also highlights some potential weaknesses, particularly around crime and public safety.

Almost half of voters, 47%, have a positive opinion of bass, compared with 27% who have a negative opinion, the new poll found. That aligns with previous polls, which have shown a striking consistency in voters’ opinions of Bass throughout the election year.

The majority also believe that Bass can make progress on some of her goals, particularly those related to race relations and bringing the city together.

Black voters were the most optimistic about the state of the city and the prospects for Bass, who is only the second black mayor in Los Angeles history. Asian and Pacific American voters had the worst impression of Bass and were the most likely to say they had no opinion of her, a weakness that became apparent during her campaign.

Contrary to Bass’s generally favorable opinion, only 30% of LA voters had a positive opinion of the council, while half opposed it.

The California Community Survey, conducted Nov. 28-Dec. 12, was sponsored by three community organizations — the Los Angeles Urban League, Hispanas Organized for Political Equality, and the Center for Asians United for Self-Empowerment — and was conducted in consultation with the Times developed reporters and editors.

“Not only does she have high honeymoon poll ratings, but the City Council enjoys very low standing. It couldn’t ask for a better political landscape,” said Dan Schnur, who teaches political communications at USC and UC Berkeley and helped direct the poll.

“This honeymoon gives her tremendous influence on the council,” he added.

“The mayor’s best weapon is the rowdy pulpit, and the best way to move the city council is to demonstrate that their constituents support your goals,” he said.

Bass came into office in part because voters believed she was best positioned to bridge racial and community divisions in the city. Fifty-five percent of voters in the new poll said they believe it will bring LA’s diverse communities together, while 51 percent said it would improve race relations. Just over 1 in 4 voters said they believe the city will deteriorate on both of these fronts.

While Bass’s popularity gives her leverage on the unpopular city council, she would lack that advantage in a possible run-in with the Los Angeles Police Department. Voters have a positive image of the LAPD, ranging from 55% to 33%.

The poll found that white and Hispanic voters were more likely to view the ministry favorably than black voters.

The mayor, who began her career as an anti-police abuse activist, has carefully avoided confrontations with the LAPD.

“I think her relationship with the LAPD is still a question mark. It’s a lot of work moving that needle,” said Michael Lawson, president and executive director of the Los Angeles Urban League, who also serves on Bass’ transition advisory team.

“The LAPD is a tough nut to crack,” he said.

Bass has called for more community safety partnerships and has been adamant that the Los Angeles Police Department should grow, not shrink. Throughout the campaign, she said the department should return to its assigned level of 9,700 sworn officers by hiring more civilian workers to free up officers to return to patrol duties. The number of sworn officers is now about 9,200.

“We need to stop ongoing crimes and hold people accountable,” Bass said at her inauguration. “Some neighborhoods have asked for additional officers and we will deliver. But what the neighborhoods are demanding and what they need is as diverse as our city.”

The poll comes after a year in which racial and ethnic divisions became apparent.

These reached a climax with the Council’s tape, which shook the city.

The tape, released in October, chronicled a meeting in 2021 where then-council president Nury Martinez, along with members Gil Cedillo and Kevin de León, sat down with union leader Ron Herrera to develop a strategy for redrawing the borough’s borders of the Council to develop the Latino policy to strengthen energy. The discussion included derogatory remarks about blacks, Jews, Armenians, indigenous people and gays.

Martinez and Herrera resigned. Cedillo had already lost his race and had disappeared from public view. Just last week he emerged with his first lengthy comments since The Times first reported on the leaked tapes, claiming he was a victim of “abandon culture” and a “modern version of McCarthyism”.

De León has dug in, refusing to step down and return to meetings despite being hounded by activists at every public event.

But the poll shows that much of the council’s unpopularity with voters is due to factors other than this recent scandal. About 4 in 10 Black and Hispanic voters expressed a negative opinion of the council, as did 3 in 10 Asian American voters. That rose to 6 out of 10 among white voters. White conservatives were the most negative about the advice.

The poll found that about 60% of Los Angeles voters rated the state of race relations in the city and California as a whole as either fair or bad. This number varied slightly depending on the breed, but was largely constant. The Latinos, Blacks and Asians surveyed were far more likely than white voters to also be victims of discrimination.

“There’s a great awareness that there are some issues, but there’s also a lot of support for how to address these challenges,” said Charlie Woo, Megatoys chief executive officer, Board Chair of the Center for Asians United for Self-Empowerment and a longtime power in city politics.

This was an opinion expressed by representatives from each of the three groups that sponsored the survey.

In the wake of the City Council tape scandal, many politicians, editorial boards and good government groups have proposed expanding the council, arguing that members representing smaller wards would make it more responsive to voters. The poll found broad support for such a move, without specifying a size. About 60% of voters were in favor of enlargement, while 24% opposed it. The rest were undecided or said they didn’t know.

Although the measure now works well as an abstract proposal, voters may think differently after hearing conflicting arguments in a campaign. Relatively few Angelenos have spent much time pondering the pros and cons, although the council’s expansion has been much discussed in political circles following the Times’ taped coverage.

“As opposed to saying people are not engaged. I think people are committed, but sometimes they’re just trying to survive,” said Helen Torres, executive director of Hispanas Organized for Political Equality.

“I think it’s going to be a tough exercise,” she added. “If there is a direction and a movement to expand the City Council or to reconsider our thinking about redistribution, it has to be accompanied by real investment in community engagement.”

The California Community Poll was conducted by Strategies 360, a polling and research company that surveyed 1,005 Los Angeles-registered voters from an online poll panel. Respondents were interviewed in English and Spanish. The survey’s confidence interval, the equivalent of the margin of error for panel-based surveys, was 3.1 percentage points in either direction for the entire sample.