The community garden in Watts provides comfort and produce to immigrants

Conrado Esquivel calls his papaya tree “El tigre” because of the legs that sprout from its base.

The pomegranates he grows are red or green, some bitter, some sweet.

On a recent afternoon, the chilies were almost ready for harvest, as were the berro, or watercress.

He named this plot in Watts “Rancho el lorocito” after the white flower that sprouted profusely from a tree overhead as he sat in his usual place watching over the harvests of four other gardeners. 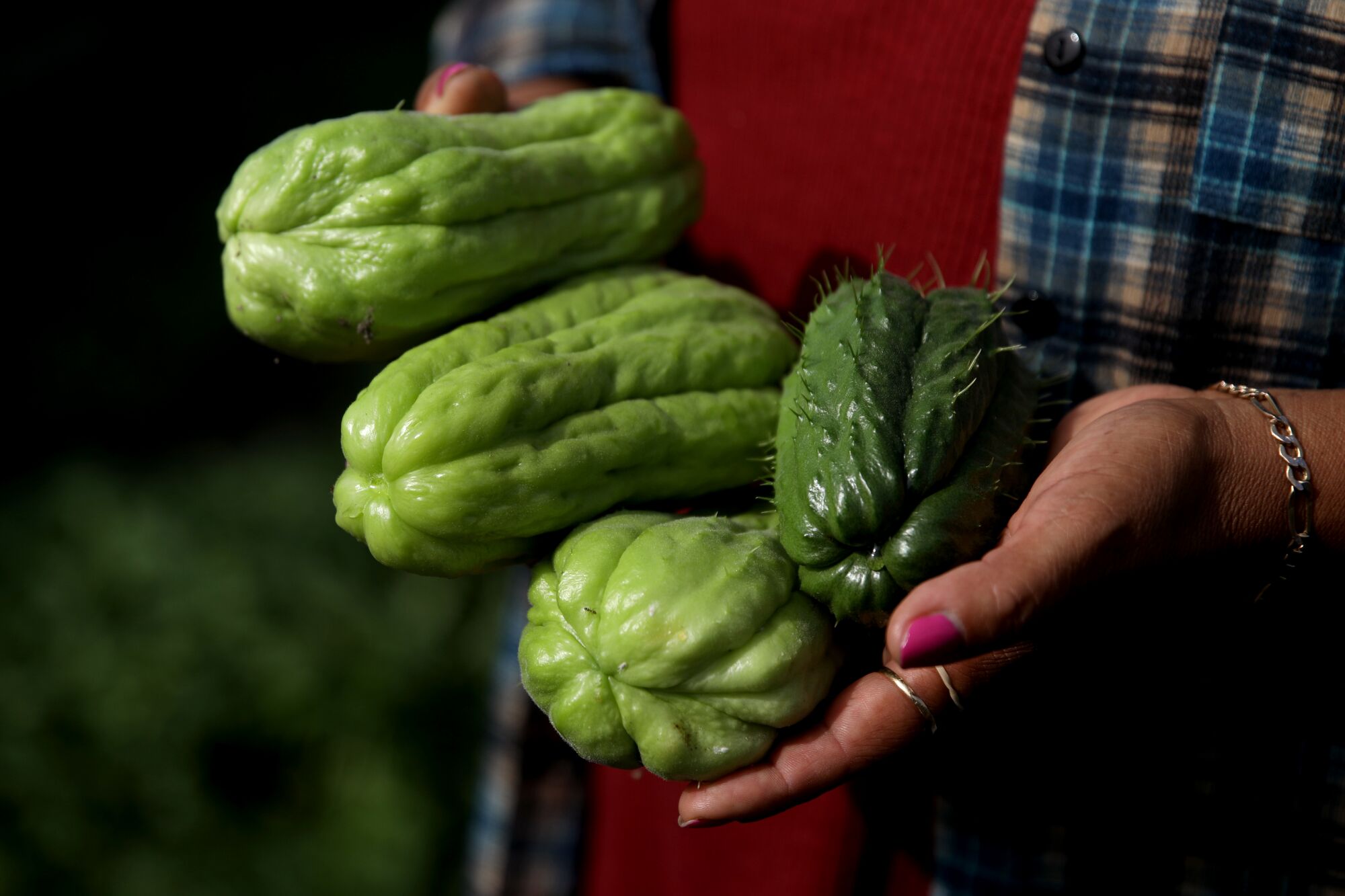 Ana Miguel keeps chayote out of the garden that she tends.

Where Esquivel grew up, in Michoacán, Mexico, he didn’t eat loroco, but it was here that he learned to cultivate it for the Salvadorans, who use it in dolls and other dishes.

Such is the nature of this community garden with its more than 200 plots tilled by immigrants from across Mexico and Central America. They have planted foods from their hometowns — the leafy greens papalo and chipilin, the herb hierba mora — and share them until one person’s traditions become everyone’s.

Many of the gardeners have worked on construction sites or in factories for decades, but never realized the American dream of a house with a garden. 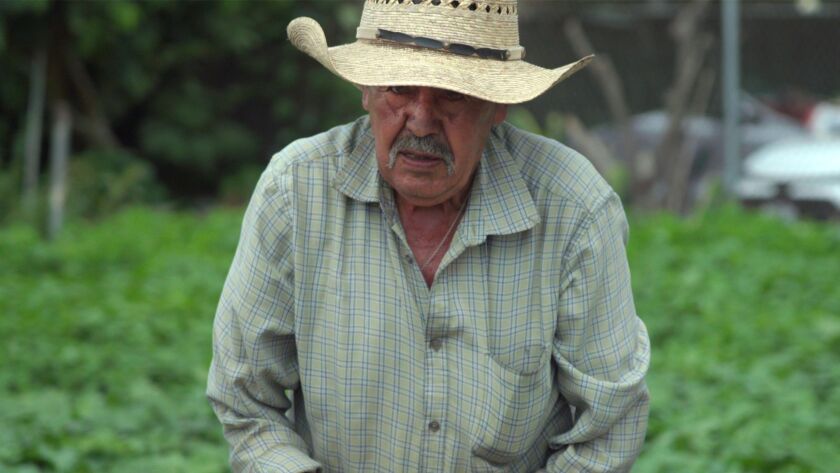 A few miles from the intersection of the 110 and 105 freeways, a group of around 200 people are growing food, mostly for neighbors and their own kitchen. This farming community found a connection to their homelands, growing traditional ingredients for Mexican and Central American cuisine under the power lines.

You come to this 11-block stretch of land framed by utility poles on 109th Street, west of the Nickerson Gardens housing development, to feel the earth between your fingers, watch the plants grow, marvel at the orange butterflies, cling to it to remember from home. Tomatoes from the Stanford Avalon Community Garden in Watts.

Esquivel, 59, has occupied his part of the garden for so long that he is considered a leader and offers a warm hospitality to strangers.

“Go ahead and have one — with confidence!” he said, offering a visitor a guava from a nearby tree.

He farmed onion fields with his family in Michoacán before coming to the United States as a teenager in the 1980s and working in a refinery.

In 15 years of tending plants here, he has been out of his Maywood home almost daily, but is now crippled by diabetic dizziness.

“You can relax here,” he said. “You forget a lot. If I couldn’t return home to sleep, this is where I would sleep. I would live here, at the foot of what I sow.” For some, it was a challenge to find the $30 a month to rent a property that included water and other expenses. Now, with the statewide drought, they’re paying more — $40 a month, negotiated from the $50 proposed by the Los Angeles Community Garden Council, which manages the gardens in the city.

The garden, known as the Stanford Avalon Community Garden, was formerly located on 41st Street until Ralph Horowitz, the developer who owned the land, took it back in 2006.

The gardeners managed to raise $16 million to buy the land. Horowitz declined. Some gardeners switched to another collective while others found support from local politicians who helped them find a new strip of land in Watts. The fight was documented in the Oscar-nominated film The Garden.

Most community gardens in LA are “hobby gardens” for wealthier sections of the population, said Pierrette Hondagneu-Sotelo, a USC researcher who has written a book on California gardens. This is “a place of healing, home and economic engine” for a diverse group of immigrants – indigenous, mestizo, Central American, she said.

On many plots, gardeners have erected awnings or “casitas” where they can enjoy the scenery and dine with neighbors. Some are equipped with BBQ, electric oven and storage areas.

“These little casitas, each one is a little different,” said Hondagneu-Sotelo. “You see guys sitting back there on a little humble bench, talking, gossiping, talking to each other.”

Ana Bustamante and her husband Luis Bustamante secured a property last summer. Planting a new garden was difficult as watering was limited to three days a week during the drought. What they were hoping for a corn crop had produced only a few small sprouts.

Her husband walked between the rows and sprayed liquid fertilizer.

“Por eso no nos salió nada. Por el agua,” said Ana Bustamante. That’s why nothing grew. Because of the water.

A plant as resilient as a weed thrived – hierba mora. Bustamante’s father, who milked cows on his morning rounds and tended his land in El Salvador, tore up pieces of the vegetables for her to eat in the mornings before school.

“It grows naturally as long as you water it. It has good vitamins, it gives you energy,” she said. “My dad would say, ‘Here so you don’t feel tired.'”

Her house in Compton is surrounded by asphalt, with a strip of grass on the sidewalk too small for gardening. In the community garden she can grow vegetables for her family and nine rabbits.

At the age of 71 she was widowed twice. She is on sick leave after a piece of wood fell on her back while working in the warehouse, damaging her back.

“When you’re struggling with what’s happened in the past, you come here to relax,” she said. An aracha grows in the Stanford Avalon Community Garden in Watts.

At the edge of the garden, Maria Gonzalez, 59, picked leaves from a tree and wiped the dust with her hands. She gave them to a friend to help with his high blood pressure. Brew them up in a tea, she instructed them.

She sometimes hops on her bike to work at a nearby party supply store, although she believes there will be layoffs soon.

She lives here in the garden and usually sits outside to escape the confines of the van that is her home. Maria Gonzalez, 59, helps others with their plots at the Stanford Avalon Community Garden in Watts. It’s one of the ways she manages without a full-time job. Upstairs she is picking medicinal leaves for a friend.

She’s lived in the US since she was 14 but has never quite settled into the routine, especially now that inflation is eating away at her meager income. Their children are grown and have families of their own, mostly in out-of-town suburbs.

She remembers her childhood in Mexico, running through green fields chasing butterflies and catching them. She and the other children would—and she winces now—press the butterflies into books so they could admire the beautiful colors.

The butterflies in the garden remind her of home.

“I like being here, maybe because I feel closer to Mexico,” she said. “I feel free.”

On the weekends, locals visit the garden to buy plants and herbs that cannot be found in the supermarket.

Olivia Cruz Garcia said a family friend told her about the fresh, organic produce available at a low price.

She told Esquivel that she was looking for Nopales. He had none, but he sent them home with bundles of papalo, a pungent plant that calms the stomach; Hierba buena, a minty medicinal herb; and Flor de Calabaza, the flower that blooms from zucchini. Lupe Ramirez sits in the shade of a guava tree on her property in the Stanford Avalon Community Garden.

“You guys miss the epazote,” he told them as the couple walked away and retreated to his garden to get some of the aromatic herb, often used in Mexican dishes like quesadillas or esquites. Moments later he handed them the bundle.

“How much?” asked Cruz Garcia.

“Nothing,” he said, waving his hand.

Garcia’s husband, Juan Espinoza Trujano, shared the recipe he wanted to make from his hometown of Pueblo: quesadillas with epazote, flor de calabaza, onion and chili.

Husband and wife, both 60, have reduced their working hours in their garment factory jobs and paying bills and rent has been difficult. Groceries have become expensive. They were relieved to discover the garden.

Esquivel said he always gives away some of his products for free. The karma will come back in the green and lushness of the next harvest, he believes.

“If you want to shop, go to El Super,” he said, referring to the supermarket chain. “Friendship is better than money.”

What to Expect from the Creator Economy in…