The LA Grand Hotel will host homeless Angelenos for another year

A 13-story hotel that has served as a cornerstone of Los Angeles’ fight against homelessness and was scheduled to close in less than three weeks will open for another year, city officials said Friday.

The LA Grand Hotel, which has served as temporary housing for some of the city’s homeless since the outbreak of COVID-19, will remain operational until at least January 31, 2024, said Mercedes Marquez, the mayor’s director of housing and homelessness solutions.

The hotel, which has provided about 480 rooms to the city, is expected to provide Bass with a crucial tool as she scales up the activities of Inside Safe, her initiative to dismantle homeless camps and shelter the homeless.

In 2021, more than 100 people were moved there from a massive camp at Echo Park Lake, according to the mayor’s office. Homeless people were also relocated to the hotel from camps in downtown, Little Tokyo, Koreatown and other parts of the city.

“The big one is here. It works out. And we want it available now,” Marquez said.

Bass and her team made the announcement during a reception celebrating efforts by the mayor, councilor Traci Park and St. Joseph Center to move dozens of people from a sprawling Venice camp to emergency shelters over the past two weeks.

In Venice, the mayor’s Inside Safe initiative initially focused on people living on Sunset, Hampton, 3rd, and Rose avenues. But in recent days it has also offered shelter to residents of a long-standing camp on Flower Avenue, a residential street nearly a mile away.

Bass told the crowd of residents and businesspeople that the operation would allow them to “take back” their local roads. She urged them to contact St. Joseph, who provided homeless and other services during the Venice operation, whenever they see new tents in the area to ensure these newcomers receive offers of housing and services as well.

“It’s not a flash in the pan. This is not a trick. This is serious business here,” she said.

Those who attended the reception at Rose Venice, a restaurant in the area where the camp operation took place, cheered the effort.

“It feels like the city is listening, and they’re trying,” said Matthew Royce, an architect who works a few blocks away. “That’s all we ask for – some compassion and a plan to solve the problem.” 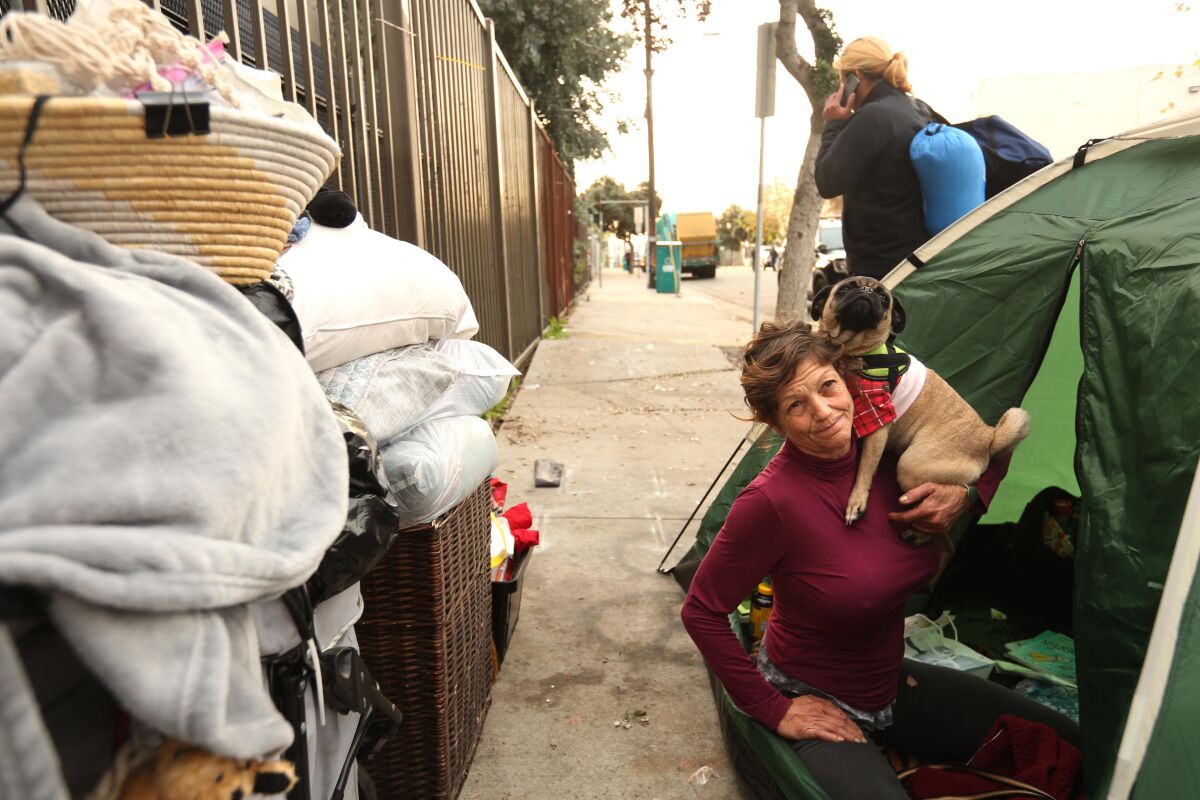 Nicole Ginsberg, 51, and her dog Lilly Day were among the latest living in a tent on 3rd Street in Venice as of Friday morning. They were later taken to a Bridge Home shelter a few blocks away.

As of Friday morning, the initiative had moved 96 people to motel rooms or other accommodations in Venice. At this point, about half a dozen tents remained on the nearby sidewalks.

In one of them was Nicole Ginsberg, who was packing up her things to move into a nearby Bridge Home lodging. Ginsberg, who grew up on the Westside, wasn’t sure why she was among the last to receive an offer of temporary housing.

“When you get picked for a football team, I’m always the one that they say, ‘Well, we’ll take them in the end,'” she said, laughing.

Bass was joined at Friday’s reception by Susan Rice, former US Ambassador to the United Nations who is now director of the Biden White House Domestic Policy Council. Bass and Rice spent the day visiting Skid Row and other parts of town with eminent homeless people and speaking to field workers and the homeless.

The mayor launched the Inside Safe initiative last month, taking 31 people off the streets of Hollywood. She has since entered discussions with Council President Paul Krekorian about potential locations in the San Fernando Valley. 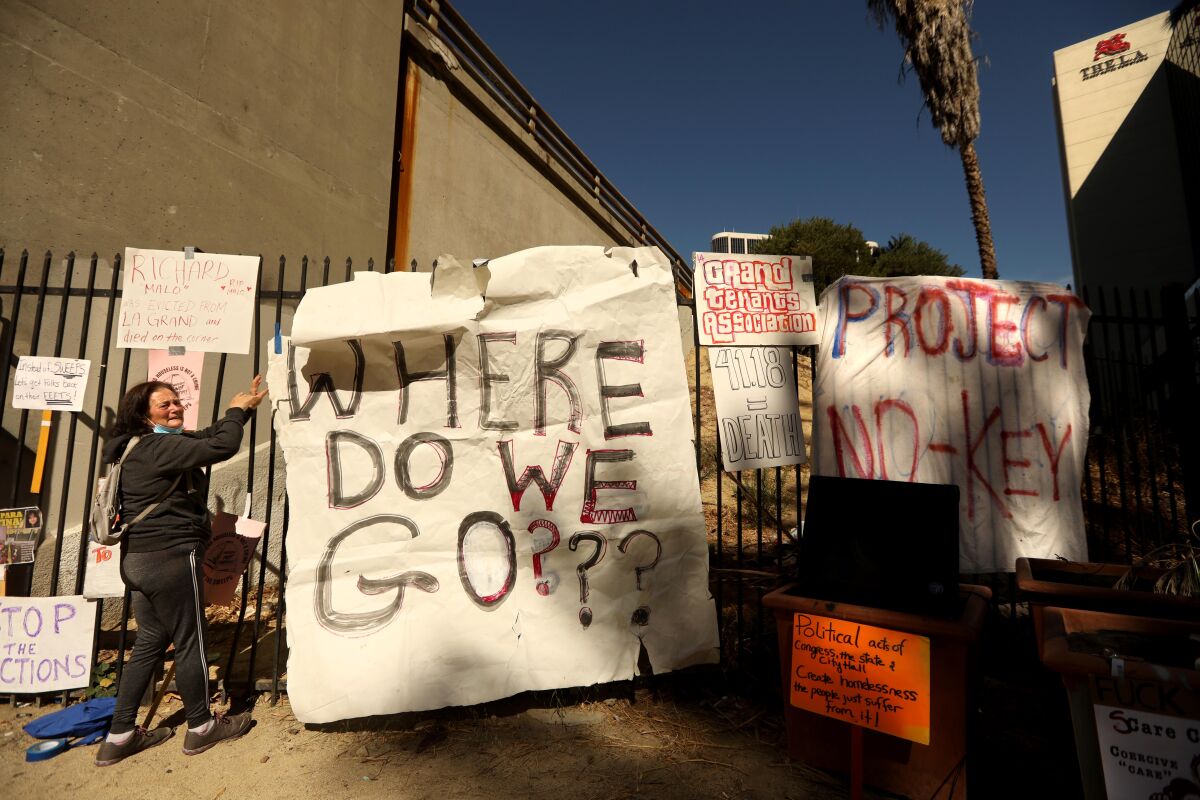 Krekorian on Tuesday filed a request to transfer $50 million to the Inside Safe program, tapping into unspent COVID relief funds and other funds.

The LA Grand is one of several hotels that have participated in Project Roomkey, a program launched during the pandemic to protect the city’s most vulnerable homeless residents. The federal government originally offered to cover 100% of the cost of the Roomkey project, but reimbursement has been slow so far.

By the end of November, Los Angeles officials had filed requests for nearly $193 million in federal reimbursements for Project Roomkey and had received $13.5 million, according to the city’s data.

Last year, homelessness activists and Project Roomkey participants called for the city to acquire the LA Grand. Instead, city officials began shutting down the hotel, partly out of concern that federal funding would eventually dry up.

Last week, 116 of the rooms at the LA Grand were occupied by formerly homeless people.

At full capacity, the hotel and related expenses — food, medical, security, and other services — cost the city about $3.7 million a month. City officials have been working to negotiate a more favorable arrangement for the coming year.

Marquez, Bass’s homelessness counselor, said her office is in the process of determining funding to continue operating the hotel. The facility will continue to provide meals and social services, she said, while ramping up programs aimed at moving people into permanent housing.

Amazon removes some Nazi-related products after complaints from…